While doing my PhD studies and first starting to research with the professor that would eventually be my dissertation director, I discovered how incredibly fun it is to try to resolve problems that no one has ever solved before. It’s hard to describe the sense of satisfaction you get when you find a solution to a problem after working on it and mulling it over for weeks or even months. The first time I felt that mix of sensations, I decided that science and research were my calling.

2. What training and background do you have as a researcher? What institutions have you worked with up until now?

3. How did you get the opportunity to come and work in Madrid?

After several years working at universities, I began to think about looking for a new position where I could do research full-time. I thought that would mean having to leave Spain. I was pleasantly surprised to learn of the Madrid Institute for Advanced Studies (IMDEA) project as a possible place to work.

What I find most appealing about IMDEA is that it allows its researchers to focus exclusively on research (as at other non-university research centers), while at the same time having PhD students to work with (like at university centers). I think this makes it an appealing and unique initiative. For me, it is also important that the project aims to have an international impact. This means that the research teams are trained by top-quality scientists.

Up until now, my research has focused on distributed computing environment problems, which include communications and computing aspects. Given the focus of the center where I work, IMDEA Networks, I will strengthen the most similar lines. For example, one of the most important research lines we have begun to explore is how to reduce energy consumption in communication networks (such as Internet or wireless networks). Likewise, we also want to explore how smart use of networks can reduce energy consumption on a global level.

We are expecting concrete medium-term results in the two lines I mentioned. With respect to reducing energy consumption in networks, we hope to propose data-traffic regulation techniques that make it possible to turn off equipment and communication lines when they are not in use, and to make their power consumption proportional to the traffic actually being transferred.

With respect to making energy use “smarter”, in the medium-term we hope to develop planning equipment that regulates energy consumption and storage in a controlled environment (for example, a group of buildings). The aim of such planning is to make consumption observed from outside the environment as low and uniform as possible.

I was born in Talavera de la Reina, Toledo, and I lived in Belvís de la Jara until I came to Madrid to attend college. I think that Madrid has a number of features that make it attractive to world-class researchers, such as its climate, its geographic situation, the size of the city and the availability of services.

7. We’ve heard that you love to travel and that a couple of years ago you spent some time in China. Tell us about your impressions of the trip.

During my PhD studies and my post-doctoral work, I met students and researchers from many countries and continents. By sharing experiences with them, I saw how remarkably similar we all are, regardless of where we come from. I got the urge to know more about other societies and cultures. Plus, having friends in different countries is a great reason to go traveling.

During my two years at MIT, I met Liu, a professor from China. Despite our age difference, we really hit it off. We actively worked together in a research project but, more than anything, we spoke a lot about our respective cultures (he grew up in the Mao-era and his world view was fascinating). After having lost touch for several years we reconnected and, in June 2008 (one month before the Olympics), I went to visit him at his research center in Beijing. Thanks to the visit, we rekindled our friendship and our professional relationship.

As it was my first time in China, I was most surprised at the country’s dynamic energy. I imagine this happens to most people that visit the country. The amount of people, the traffic density (cars, motorcycles, bikes), and the sheer size of the city and its buildings are mind-blowing. It was an adventure just to cross the street. You really just had to do as the locals did. Even taking a taxi meant having to write out your destination ahead of time.

The only downside to the experience was the pollution: it was so heavy that I didn’t see the sun during my entire trip. Plus, I had the sensation that everything was changing too quickly. I suspect that the country that I visited in 2008 is becoming less and less like the country that Liu used to tell me about, sitting around the lunch table, over ten years ago. 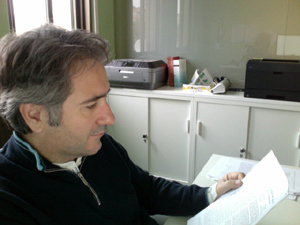 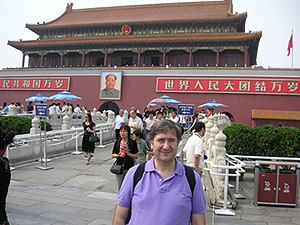 Antonio Fernández Anta during his visit to China