Two Spanish scientists haves been voted onto the Steering Committee of the European Technology Platforms  (ETPs) Net!Works and ISI. They are 2 of the 6 international scientists elected during the joint general assembly held yesterday, October 29th, in Brussels. Among the 25 candidates representing excellence in advanced telecommunications research, 6 Spaniards have bid for a place in this organization that will lead the next decade of European research on mobile communications.

The first elected Spanish candidate, Arturo Azcorra, is a pioneer of internet and network science research in Spain, as well as a promoter of telematics as a scientific and academic discipline born from the integration of telecommunications and informatics. He is the former Director General at the Spanish Centre for the Development of Industrial Technology (CDTI), and currently a Full Professor at the Department of Telematics Engineering at University Carlos III of Madrid and the Founding Director of the networking research institute IMDEA Networks. His election reinforces the growing international impact of the young Madrid Institute for Advanced Studies, which since 2006 has performed cutting-edge science aimed at achieving excellence on information and communications technology research made ​​in Spain. The ICT sector is a key catalyst for industrial and societal progress, with a vital socio-economic impact on Europe’s future.

The second Spaniard in joining this committee is Carles Antón-Haro, Director of R&D Programmes in the Centre Tecnòlogic de Telecomunicacions de Catalunya (CTTC), a technology center for research in communications systems based in Barcelona. The presence of these two scientists in a European decision-making body represents an endorsement of the quality and international projection of Spanish networking science. 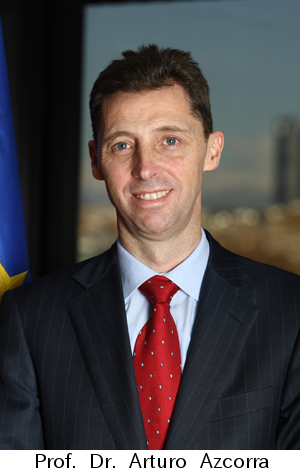 Dr. Azcorra and the rest of the new members will be responsible for the Strategic Research Agenda (SRA) followed by a Public-Private Partnership or PPP that consists of 400 ICT research sector entities, from the EU and associated countries, which voted yesterday. The PPP will lead the development of “Horizon 2020 Advanced 5G Network Infrastructure for Future Internet PPP". This program, known briefly as "5G PPP", is intended to deliver solutions, architectures, technologies and standards to create ICT infrastructure and intelligent communication networks that are ubiquitous, robust, flexible, interoperable and cost effective.

The launch of the 5G PPP initiative arises in the context of “Horizon 2020”, the EU research framework program, which will operate from 2014 for a period of 7 years with an estimated budget of 80 billion euros. 5G PPP will receive around 120 million euros from the EC, on top of the contributions (yet to be defined) from PPP company members.

European Technology Platforms (ETPs) are industry-led stakeholder forums, bringing together researchers, industry and other interested domains, in order to develop short to long-term research and innovation agendas as well as roadmaps for action, at EU and national level, which are supported by both private and public funding. The ETPs Net!Works (Converged fixed and Wireless Communication Networks) and ISI (Integral Satcom Initiative) have merged during this event. Both ICT platforms therefore combine their efforts to strengthen European industrial and technological leadership in the field of mobile and satellite communications. The vision of a seamless and transparent access to mobile and wireless, fixed and satellite-based voice, data and multimedia services, is their new joint challenge.

The rise of mobile Internet has been probably the most remarkable communications phenomenon of recent years. The ICT market now contributes to 5-6% of EU GDP, and employs more than 7 million citizens, with a positive correlation between the penetration of mobile phones and boost to GDP per capita. 4G is just the beginning of a revolution towards Internet access to services of an unprecedented complexity and richness. The future 5G network will provide advancements such as 1000 times higher wireless area capacity for 7 billion people and 7 trillion objects, 90% energy savings per service provided, and the creation of a secure and reliable Internet, with zero perceived downtime for services.

Telecommunication infrastructures built in Europe have helped improve the quality of life of Europeans by enriching services in many areas increasingly dependent on connectivity such as health and well being, energy and the environment, or transportation. The 5G PPP initiative also aims to reduce the digital gap between urban and rural areas, accelerate the adoption and use of advanced ICT services, strengthen the competitiveness of the European economy and promote innovation and research that enable Europe to recapture the global technological lead.