Structure is the key

Science has historically taken an analytical approach to studying the world and nature, breaking them down into their constituent parts and studying each part separately. The aim has been to derive the properties of the whole from the properties of its parts.

In recent years, it has been demonstrated that while the parts that make up a system are important, what is as or even more important is how these parts relate to each other, the system’s structure. This observation has even lead to the appearance of new scientific fields, such as network science. A friend recently gave us a clear example of the importance of structure1: take an apple and put it in a blender. Before and after the blender is switched on it contains the same set of basic elements, but the main difference is in the structure.

At IMDEA Networks, as part of a project coordinated by Zed Worldwide S.A. and Factory Holding Company 25 S.L. (FHC25), we are developing a tool that will allow large, complex systems to be studied from a structural point of view. With this tool the systems being explored are modeled as networks composed of entities and the relationships between them. For example, it could easily be used to study the structure of social networks, where the entities of the network are people, and their relationships could be friendships, for example.

In fact, we are surrounded by (and made up of) networks: the highway network, the networks of neurons in our brains, the network of commercial relationships between businesses and so on. The power of our tool is that it can be used to study all of these types of networks, too.

It will enable networks to be studied in a variety of ways, including extracting a network’s basic properties such as the number of entities and relationships it consists of, the average distance between them, the diameter of the network and so on. These properties already tell us a lot about the network. Even without historical data, the network’s formation and pattern of growth can be deduced, and we can therefore predict to some extent how it will evolve in future. If we also know how the network has changed over time, we can make much richer and more detailed predictions.

One very important aspect of these studies is the possibility of influencing the future development of the system being studied. For example, we can determine the key entities of the network (the friends who keep the group together), without which, the whole thing would come apart. If we know who these individuals are, we can take measures to persuade them not to leave the system and even encourage their activity within it.

One of the greatest challenges presented by the project under development is the size of the networks that will be studied. We aim to be able to process networks with hundreds of millions of entities and billions of relationships. Networks at this scale are already common (Facebook and Twitter, for example) and the success of these existing networks clearly suggests that even more complex ones will appear in future. Efficient processing of networks of this size requires the development of more advanced technology than is currently available. What we do know is that this future technology will look for the keys to networks in their structure, and this structure’s complexity will determine how difficult it is to create. 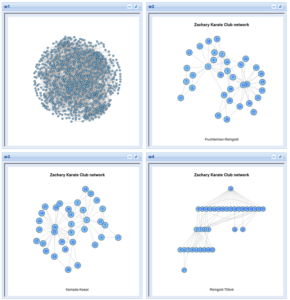 Graphical representations of networks in which each circle is one entity and the lines represent relationships between entities. Panel w1 shows a dense and highly interconnected network. Panels w2 to w4 show different relationship types within the same network, with the network shape changing according to the type of relationship selected (most active nodes, dependencies, etc.).

This (adapted) example is reproduced with his permission.