The director of IMDEA Networks Institute took part in the recent online conferences, Digital Around the World and Samsung DEV Day 20, two prestigious events at which attendees reflected on the importance of digital transformation

The IoT Forum, made up of a community of research centres and industries specialising in the Internet of Things (IoT) held, on 20 and 21 October, the international online event Digital Around the World, a series of conferences (up to 27) running round the clock for 24 hours, in accordance with different international time zones. 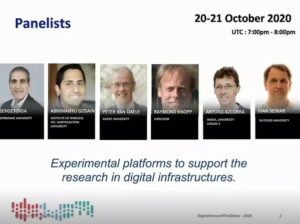 During his talk, Azcorra described what has been achieved until now by the 5TONIC research laboratory, founded by Telefonica and IMDEA Networks, a successful example that the moderator of the event defined as ‘the meeting point between academia and industry’. Azcorra stressed the quality of the laboratory, specialising in 5G, to cover the entire path of the tech value chain, mentioning the drive of spin-off companies in this playing field. A complete system ‘with different alternatives for each of the features’, not only contributed by the actual members, but also the collaborating companies that contribute to the final outcomes of cutting-edge research projects related to Industry 4.0, health emergencies, autonomous vehicles, security, and television rebroadcasts.

On 12 November, Arturo Azcorra then participated in Samsung Dev Day 2020, an online conference with many prominent members from the Spanish community of innovation and entrepreneurship, in which they spoke of issues including 5G, artificial intelligence and edge computing. The opening address was made by Carme Artigas, Secretary of State for Digitalization and Artificial Intelligence, who stressed the great importance of digital transformation for economic recovery. 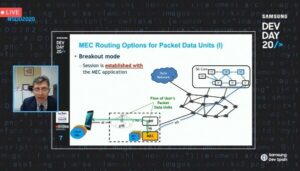 Then, the director of IMDEA Networks gave his talk ‘Developing Applications for 5G and Edge Computing’, in which – also with regard to 5TONIC – he revealed essential factors including  the status of 5G as an open network, the importance of virtual base stations and the fully virtualised control plane, as well as the revolutionary benefits of a system that enables huge volumes of information to be handled, with the lowest latency and delay possible today. A new era for which Azcorra pointed out the virtues of edge computing in this technology: ‘due to its services throughout the world with zero investment in infrastructure and unlimited scalability, and due to being the only solution for applications with “hard real-time”, for the real-time processing of large data volumes and apps’.