NETCOM Research Group from University Carlos III of Madrid, in collaboration with Institute IMDEA Networks, a computer networking research institute backed by the Madrid Regional Government, has announced the successful completion of the European TRILOGY Project (Re-architecting the Internet – An Hourglass Control Architecture for the Internet, Supporting Extremes of Commercial, Social and Technical Control).

The project was designed to enable and develop the control functions of the Internet, in particular Reachability and Resource Control. It covered both commercial and technical perspectives to achieve results relating to architecture, protocols, simulations, prototypes and standardization at the IETF (Internet Engineering Task Force).

The Trilogy project ran from the beginning of January 2008 to the end of March 2011. It involved eleven partners from the public and private sectors, including five universities, four telecommunications companies and two research centers. The project was led by Dr. Marcelo Bagnulo Braun, Associate Professor of the Telematics Department at the Carlos III University in Madrid (UC3M), a member of NETCOM Research Group and of the Internet Architecture Board (IAB) and an ongoing collaborator with Institute IMDEA Networks. Two of the Institute’s researchers actively collaborated on the project.

Trilogy’s bold objective was to re-architect the world’s ICT infrastructure. Among the project’s achievements was the development of two important new control functions that will be deployed widely on the future Internet, improving it significantly. 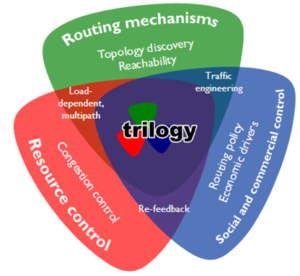 Multipath TCP (MPTCP) enables a TCP connection to be spread over multiple paths. Benefits include improved resilience (the connection works even if one path fails), improved network utilization (resource pooling) and a form of mobility. Trilogy researchers have developed a new congestion control algorithm that balances the traffic between multiple paths, moving it away from congested paths and exploiting areas of the network with unused capacity. They have further developed a new signaling protocol that extends TCP by enabling it to add and delete paths. The work encompasses theory, adoption studies, simulations, code, standardization and experiments, especially regarding its application in data centers.

Congestion Exposure (CONEX) allows all network elements full visibility of end-to-end congestion (information that is currently only available at the endpoints). Benefits include better traffic management by the network, user control of the end-to-end quality of service, and a form of DDoS protection (Distributed Denial of Service).Trilogy scientists have developed a new protocol that enables endpoints to pass on the congestion information to the network elements. They have also evolved an accountability framework, in particular a policer, which uses the congestion information. This work includes theory, adoption studies, simulations, code, experiments and standardization.

The project also generated extensive research on routing. It conducted a set of studies that characterized key properties of today’s routing system. Researchers have variously designed, implemented and/or developed, and evaluated several mechanisms, primarily for multipath routing. These include Multi-path BGP, BGP Add-Paths and LISP. They have also helped develop and standardize several other Reachability capabilities, especially NAT64 and source address validation.

Underpinning the above elements was the aim of developing both an overall Trilogy architecture – describing how the ‘building blocks’ (MPTCP, CONEX and multipath routing) fit together – and a set of design principles – engineering guidelines that capture the abstract concept of ‘design for tussle’. Both met with overall success.

In support of its research work, Trilogy organized over a dozen workshops, including: “Internet Reloaded” (to gain socio-commercial insights from industry leaders whose businesses revolve around the Internet); a Summer School (talks from Internet gurus within Trilogy and beyond); an MPTCP Implementers workshop (discussions with OS communities on applications and how to make MPTCP a success on the real Internet); and ReArch (a new workshop series, part of the prestigious ACM CoNEXT conference). Some of the keynote speakers and moderators at two IETF Technical Plenaries on “Network Neutrality and the IETF” and “Economic perspectives on Congestion” were Trilogy members.

The Trilogy project has led to the publishing of some 70 articles in recognized journals, as well as conferences, workshops and even book chapters. Furthermore, project partners at the IETF have worked extensively with external researchers on Internet standardization. Trilogy has helped establish two new working groups (MPCTP and CONEX) and has authored or co-authored 9 RFCs (Requests for Comments), 12 Internet drafts by other working groups and 31 drafts by other individuals.