On International Programmer's Day, we present a compilation of the top programming languages. We talk to Manuel Herrera, our software developer, about the languages he uses in his work

Since the earliest days of the Internet, websites have not stopped evolving. Long gone are the days of the first, text-heavy websites. Now interactive content is king. Consequently, over time, different professions have emerged in the area of web and application development, such as frontend programmer (dealing with the visible part of the web, the interface) and backend programmer (in charge of designing all the logic and solutions so that all the actions requested from a web page are executed correctly). People also talk about full-stack developers, who control both frontend and backend.

For International Programmers’ Day, on September 13, we are featuring this year’s 55 most popular web programming languages according to the annual ranking published by the IEEE (Institute of Electrical and Electronics Engineers) in its IEEE Spectrum magazine.

How the ranking is compiled

The IEEE produces the list based on 11 metrics taken from eight sources: CareerBuilder, GitHub, Google Search and Google Trends, Hacker News, Reddit, Stack Overflow, Twitter and the IEEE itself. The ranking is generated with pre-set weights applied to each of these metrics. Readers can select from two special pre-set weights that adjust the rankings to give greater prominence to current trends and to the programming skills most sought by employers. As well as this, a series of filters enables users to produce their own custom ranking by giving greater weight to specific sites which they feel reflect their own particular interests such as open-source software development, the search for jobs in the software development sector and websites in which developers discuss programming.

In the ranking, each programming language is given a score of 0 to 100 based on demand and the number of search queries and mentions of it. The language with the highest score takes first place.

Once again this year, Python has retained its top position (100 points), which indicates that knowledge of this language is essential for those interested in pursuing careers in software engineering and development. This interpreted language is currently the most widely used by professionals in different fields: students, developers, finance experts, researchers and data scientists. It has modules for automatic learning and scientific computing and one of its main advantages is that it can be used to create all kinds of tools.

What’s more, Python can run on different operating systems and is compatible with other programming languages. Its huge collection of libraries and frameworks specialised in different areas of knowledge are particularly noteworthy. 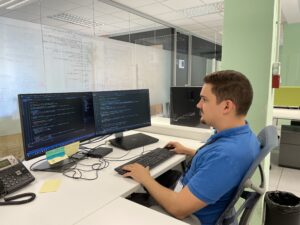 Manuel Herrera, our web developer at IMDEA Networks, tells us that he works with PHP, Java, and Python for web development and C# for the business management tool. “In my day-to-day work, I use Visual Studio Code, because it supports practically all current programming languages. I also use Notepad++ for quick notes or macros. And for more specific tasks I use Visual Studio, which supports languages like C, C++, C#”.

Of all the programming languages on the list, C# has gained most in popularity since last year, when it was not even in the top 10. It is now in sixth place. C# is a creation of Microsoft, and was launched in 2001 as a general-purpose, multi-paradigm programming language. It is the core development language of the .NET framework and its syntax is similar to that of C++ and Java.

Given that technology is advancing by leaps and bounds, we asked Herrera to make a prediction about which languages he thinks will become more important over the next few years. “Probably Javascript/Typescript using Node JS, because they are currently being used a lot in cryptocurrencies, web applications, Electron-based desktop applications and mobile applications on Android.”