The director general of universities and research visits IMDEA Networks

The head of the Directorate General of Universities and Research of the regional government of Madrid, Lorena Heras Sedano, accompanied by the Deputy Director of Research, Juan Angel Botas Echevarría, visited on Tuesday, February 3rd, the headquarters of IMDEA Networks Institute, a research center on networks that places Madrid as a leading European region in the development of future network technologies.

During this first visit by the head of the regional research policy, the scientific program of the Institute was presented and several “demos” showcased technical advances representative of the work carried out by the seven research groups and two labs in which the team of scientists is currently structured. With these didactic demonstrations by way of live experiments, researchers from different nationalities and with diverse backgrounds explained to the visitors the objectives of their work and results, highlighting the real-world applications of these developments: from rescue operations in disaster scenarios, to improved video streaming, the optimized use of a scarce resource such as the radio spectrum, reducing energy consumption, the benefits of cloud and distributed computing, or the analysis of social networks with applications in marketing or sociology.

The center, located in Leganés in a 4000 m2 building that is being gradually refurbished, has a current working surface of 1400 m2, which houses offices for researchers, the administration and support personnel and five main laboratories. In an international multidisciplinary environment coexist 56 employees representing 19 nationalities. IMDEA Networks is funded by the Community of Madrid, and private companies participate financially in some of its projects. In addition, there are currently 18 ongoing research projects that have attracted funding from various sources: 11 European projects, 3 national, 3 financed by the regional government and one supported by the National Science Foundation of China. Through these initiatives the institute collaborates with thirty industry and seventy-two academic partners.

IMDEA Networks is part of the IMDEA initiative, a project of the regional government consisting of seven specialized centers of advanced studies in seven subject areas: water, food, energy, materials, nanoscience, networks and software. The IMDEA institutes reflect the commitment of the government of the Community of Madrid to put research, science and technology at the service of citizens. 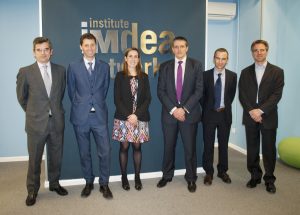 The IMDEA Networks building does not house the typical scientific working space to which we have become accustomed through the media. On-site facilities do not display microscopes, large machines, special isolation chambers, and scientists with robes holding test tubes. At IMDEA Networks research is based on wired networks, and even more in the wireless domain, in underwater communications that employ ultrasound, or in the novel idea of visible light communication, among other areas. There are many computers, cabling and measurement equipment, routers, antennas and servers, to test the possibilities of each communicative theory, each protocol and algorithm designed to make our everyday communication a more reliable, fast and safe experience.

“The ultimate goal of our work is to improve the quality of life for all. Communication is a key aspect of the social fabric, which permeates all human activities and enhances our ability to develop,” stated Arturo Azcorra, director of IMDEA Networks, during the visit. 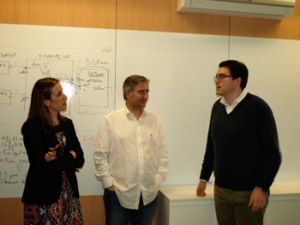 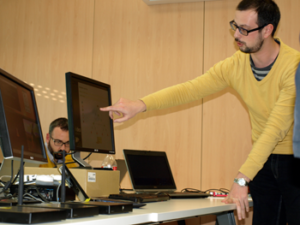 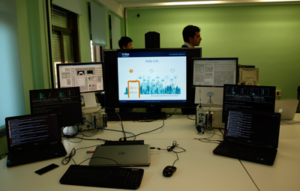 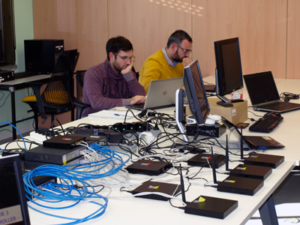