The local government of Shenzhen launched the 1st Innovation Competition of International Talents in November 2015. Open to all IT talents around the world, the competition offered $880,000 in bonuses and an additional $200 million in government subsidies and venture capital. This first edition held five divisional competitions in Sydney, Munich, Tel Aviv, Tokyo, and Silicon Valley in the US, respectively. The grand final took place in the Longgang district of Shenzhen on April 15th, 2016.

The Munich Division received 155 project proposals. After thorough expert evaluations carried out by the Organizing Committee, ten proposals were selected for the final competition in Munich, where the ten individual contestants presented their project characteristics, technology, market prospects, and so on.

The project proposal developed by Qing Wang’s team was called ‘Lighting up the Internet-of-Lights/Things with Li-Fi’. This is a flexible and open-source OpenVLC platform designed by Qing during his PhD studies at IMDEA Networks under the supervision of Dr. Domenico Giustiniano. OpenVLC is currently being used for research and teaching purposes by tens of top universities around the world. Wang’s team plans to launch general Li-Fi solutions in the near-future for the Internet of Lights/Things, visual payments, confidential wireless communication, etc. 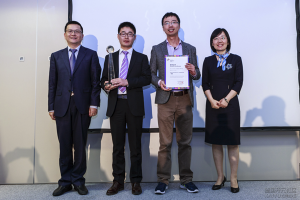 Qing Wang receiving his prize at the award ceremony (he is second, starting left to right).