IMDEA Networks and Huawei Technologies have recently launched a joint research project to explore the synergies of two distinctive wireless technologies, which are both key components of the present and future of mobile communications. On the one hand, the project builds on everyday mobile networks such as WiFi and LTE. On the other hand, it integrates state-of-the-art wireless networks operating in the millimeter-wave band, as envisioned for future 5G networks. Their combination is crucial to enable the evolution of mobile networks, one of the most impactful technologies driving change and progress toward the “network society”.

Beyond better mobile coverage for individuals, mobile technology has boosted the development of society as a whole in terms of communication, commerce, and public services. To address the resulting (and increasing) demand for mobile data, more resources in terms of frequency bands are currently being allocated to wireless networks. This allows operators not only to provide faster connections, but also to serve more users at a lower cost, thus bringing wireless connectivity to a larger portion of society.

However, using innovative millimeter-wave frequency bands to channel mobile communications poses a number of technical challenges compared to traditional mobile networks. In such traditional networks, each base station covers roughly a circular area. As long as a mobile device is within that area, the base station can communicate with it seamlessly irrespective of its location. In contrast, in millimeter-wave networks the base station must be aware of the direction in which the device is located in order to communicate with it. The underlying reason is that the signal attenuation is much higher in millimeter-wave frequency bands compared to traditional bands. The base station must concentrate all of its transmission energy in the direction of the device in order to be able to deliver messages to it. As a result, coverage is not circular anymore, and the base station can only serve one specific direction at a time. This makes it intrinsically harder to operate the network.

The partnership of IMDEA Networks and Huawei aims at tackling the above challenges.

In this joint project, the partners exploit traditional frequency bands to estimate the direction in which a user is located and use this information to steer the transmission in the millimeter-wave band. The synergy among both bands is that estimating the direction of a user is more convenient using traditional bands, whereas transmitting high volumes of data is easier using millimeter-wave bands. The goal of the project is to adapt and improve existing techniques to estimate direction for the particular case of millimeter-wave networks. To this end, IMDEA Networks contributes past technical expertise in this field, as well as an initial prototype of the system. Huawei contributes measurement data from a large practical testbed, which is key to validate the mechanisms developed as part of the project.

This collaboration is expected to result in a significant improvement in terms of steering accuracy and data throughput compared to the state-of-the-art in the area, thus paving the way for the massive deployment of millimeter-wave technologies, an essential requirement in the roadmap for 5G communications.

The project started in July 2017 and has a planned duration of one year. 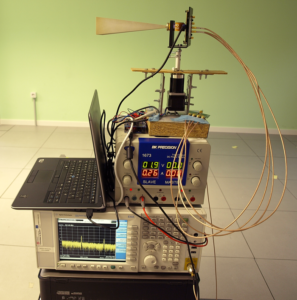