Cloud technologies will improve performance and efficiency of mobile networks

The increasingly widespread use of smartphones capable of delivering audio and video streaming is leading to an exponential growth in the volume of traffic carried by mobile networks. Such growth is expected to continue in the next few years, with forecasts that anticipate a hundred-fold increase in traffic by 2020.

In line with these forecasts, the Digital Agenda for Europe has set the goal of providing data rates of at least 30 Mbit/s to all EU citizens by 2020, with 50% of them accessing the Internet with at least 100Mbit/s. Given the current trends on mobile internet access, these goals cannot be achieved with wired connectivity only, but require mobile access capacity to be substantially increased.

To handle such increasing demands on mobile traffic, very dense and low-power small-cell networks with a very high spatial reuse need to be deployed. However, this deployment faces several challenges. First, small-cells require a high degree of coordination to handle inter-cell interference. Second, heterogeneous backhaul solutions need to be used to connect the small-cells to the core network. Third, as a result of spatial and temporal traffic fluctuations, there is a high likelihood that many of the base stations carry no or little traffic, leading to a very high energy waste.

Centralised processing provides a promising approach to cope with many of the above challenges. By leveraging high processing capacity, such an approach allows implementing efficient interference avoidance and cancelation algorithms across multiple cells. Additionally, by exploiting the fact that the data from all base stations is centralized in the same location, it provides the ability to globally control the access network, which can be used e.g. to selectively turn off those base stations that are not needed, resulting in substantial energy savings.

In the above context, Cloud-RAN (C-RAN) has recently attracted considerable attention as a technology that leverages cloud techniques to centralise the computational resources of the mobile network. With this technology, multiple sites are connected to a central unit (“the cloud”) which takes care of performing the baseband processing. Currently proposed C-RAN solutions have been designed with the assumption that the backhaul is composed of fibre links, and as a result such solutions require very high bandwidth connectivity to the cloud.

The above assumption on high bandwidth backhaul links may not be satisfied ubiquitously in future deployments, which will be very dense and rely on wireless backhaul technologies. In this context, a trade-off emerges between the benefits resulting from centralized processing in the cloud and the bandwidth consumed in the backhaul network. To address this, the iJOIN project has proposed the novel concept of “Radio Access Network-as-a-Service” (RANaaS). RANaaS provides an optimal split of RAN functionality between the mobile network and the cloud. This split takes into account not only the computational benefits of using the cloud but also the bandwidth costs.

Another major challenge addressed by iJOIN is the joint optimisation of the backhaul and access design. Indeed, the bandwidth and latency limitations of wireless backhaul technologies require a joint design and operation of the Radio Access Network and the backhaul network. This contrasts with existing solutions, which optimise each part separately and hence result in a suboptimal design.

With the iJOIN architecture, RAN functionality is centralized through an open IT platform based on a cloud infrastructure. Among other advantages, this concept has the potential to open the RAN/backhaul market for new players, such as vendors and providers of cloud infrastructure platforms. RANaaS also provides the technological foundations for shorter and more efficient product development cycles due to the shift from dedicated equipment to software-based functions operated on cloud infrastructures. Furthermore, this solution will lead to a significant reduction of costs for operators, because part of the RAN computation complexity is moved to the cloud infrastructure. 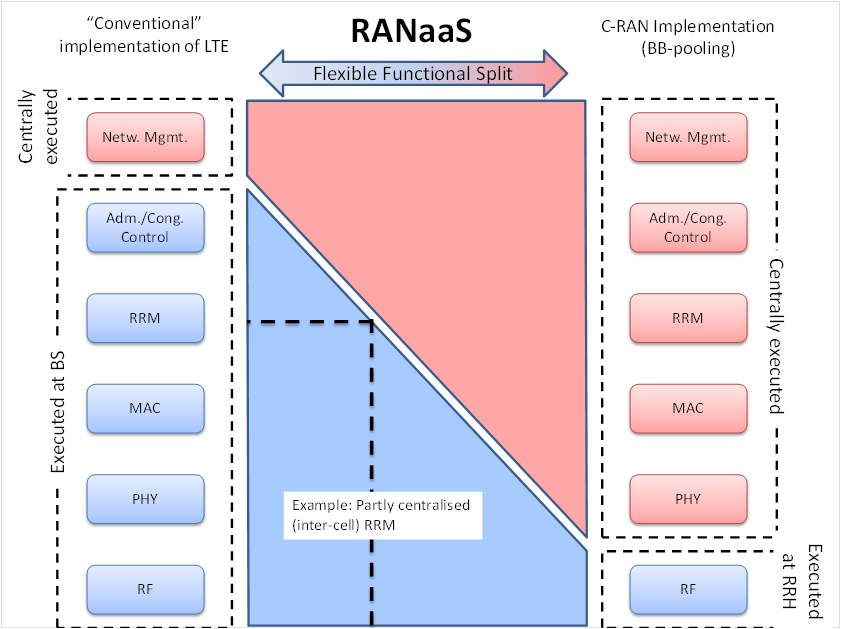 The iJOIN project has proposed the novel concept of “Radio Access Network-as-a-Service” (RANaaS).

More information can be found on www.ict-ijoin.eu