Our Research Assistant Professor Guillermo Suárez-Tangil participated on September 30 in the scientific café organized within the framework of the European Researchers’ Night at the Residencia de Estudiantes in Madrid together with his colleagues from the IMDEA Institutes. This annual event is promoted by the Vice-Presidency, Ministry of Education and Universities of the Community of Madrid, and coordinated by the Fundación para el Conocimiento madri+d since 2009, with funding from the European Commission, under the Marie Skłodowska-Curie Actions (MSCA).

Ana Isabel Cremades, Director General of Research and Technological Innovation, was in charge of opening the event. She highlighted the fundamental work carried out by the IMDEA Institutes, both for developing science of excellence and for organizing events to disseminate this scientific knowledge to society.

During the activity, the research team of the IMDEA Institutes spoke about the lines of research and projects being developed at their centers. In addition, they expressed the efforts that, from their respective scientific areas, they are making to help fulfill the 5 EU missions, whose common goal is to achieve a better and more sustainable future and which refer to adaptation to climate change, a soil deal for Europe, restore oceans and waters, climate-neutral and smart cities and conquering cancer.

In this colloquium talk, very diverse topics were discussed, one of them was focused on how to fight cancer from disciplines such as Precision Nutrition or Nanoscience. It was also discussed how to help curb climate change by reducing waste production or promoting its reuse and manufacturing batteries or biodegradable prostheses with new materials. The activity also focused on how to make the cities of the future much smarter through research into communication networks and software, and thus contribute to making them more livable spaces.

There was also time to get to know the group of participating scientists better, to find out what part of their work excites them most and what led them to dedicate themselves to research. Specifically, Guillermo told why he chose network analysis as a field of study: “Within the umbrella of cybersecurity and research, I am passionate about breaking things down and then rebuilding them in a better way”. And he expressed how research in the area of network security can help fulfill EU missions. “Crime and cyber threats have a major impact on EU missions,” he said. 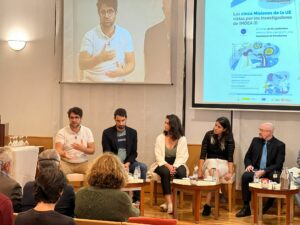 At the scientific café, he presented two issues that directly affect climate change adaptation and the sustainable development of smart cities. First, he presented a case study showing the effect of cryptocurrency mining on the environment and how malicious programs (malware) obtained from anonymous marketplaces (Tor) are responsible for a large part of the mining (4.3% of Monero), generating more than 57 million dollars of revenue with an illicit activity. “We have discovered that certain criminal groups were developing crimes whereby they were stealing from a botnet access to personal computers to mine cryptocurrencies without paying for electricity. One of the things we are doing is to improve the security of computer networks so that people using them have the assurance that they are paying for the electricity they are using and thus not allowing someone else to profit from mining cryptocurrencies on their computers”.

And finally, he delved into a current topic such as voice assistants, a key technology for the future of smart cities, while showing the problems behind the development of malware for platforms such as Amazon Alexa and Google Echo. Guillermo stressed that “a smart city is one in which the interaction with technology is very efficient and that is done with natural language”. He added, “You come home and ask Alexa what’s on the news”. However, the security challenge they face is verifying whether the source from which Alexa extracts that news is reliable or not. And this is precisely what the IMDEA Networks research team is working on.