Héctor Cordobés de la Calle, a research engineer at IMDEA Networks Institute, has received an Honorable Mention at the Data Science Awards Spain 2016 in the category of Best Data Scientist in Data Engineering. He is one of over 300 data scientists to have participated in the first Big Data awards ever to be given in Spain.

Synergic Partners, a Telefonica Group company specializing in Big Data, Data Science and Data Engineering, held on Monday the Data Science Awards ceremony at the Big Data Week in Madrid. These are the first awards in Spain to acknowledge the best initiatives in the area of Big Data by individuals, companies and data journalism.

There were three types of awards: Best Data Scientist in Spain, with three categories (Data Science, Data Engineering and Data Visualization), Best Business Initiative in Big Data within Spain and Better Data Journalism in Spain. Héctor Cordobés was a finalist in the Data Engineering competition.

The challenge Cordobés participated in required conducting a full implementation of a recommendation system for films during a month. The system had to include data collection and development as well as the theoretical justification of a mathematical model to recommend movies. It was also requested of contestants to implement the recommendation engine and the development of an actual execution environment, including a friendly front-end, with real time operational requirements and scalability.

Over 300 data scientists, 20 companies and journalists from various fields have participated in the first edition of the Big Data Awards. Carme Artigas, CEO and founder of Synergic Partners, has served as president of the two specialized juries. "We are proud of the high quality of the more than 300 projects presented. Spain is the third country with more weight in Europe in the field of Big Data: there is a lot of talent and in a world where millions of data are generated every day, Spain will have a bright future, "said Artigas. 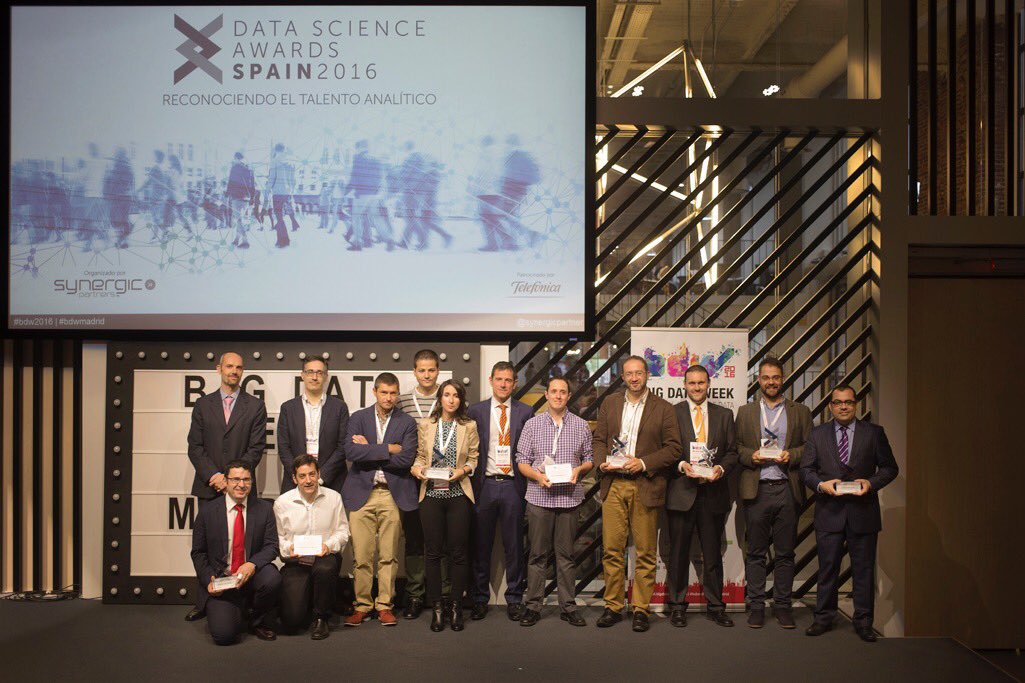 Awardees during the ceremony celebrated on Monday, October 24th. Héctor Cordobés is the second standing on the left.