5G connectivity is to become the new lifeblood of the digital economy and society, according to Günther Oettinger. The European Commissioner for Digital Economy and Society endorses the presentation of the European 5G vision made by the 5G-Public Private Partnership at the Mobile World Congress 2015.

The European Commission has chosen Spain to formally present the European vision of communication networks in the upcoming 5G era. The Mobile World Congress 2015, which concluded yesterday in Barcelona, has brought together circa 100.000 people in what effectively is the largest event in the telecommunication industry. This is the first time that the EC had its own stand and it was to show the European vision on the future of connectivity for the next decade: 5G. At MWC’15, several events set in motion by the EU 5G Infrastructure Public-Private-Partnership (5G-PPP) brought together researchers, industry, policy-makers, and academia, who have teamed up to create a competitive advantage for European ICT in the global marketplace. A 5G dedicated workshop, a keynote by Günther Oettinger, and a press panel organized by the mobile operators’ GSM Association complemented the strong emphasis given to 5G at this year’s edition of MWC. 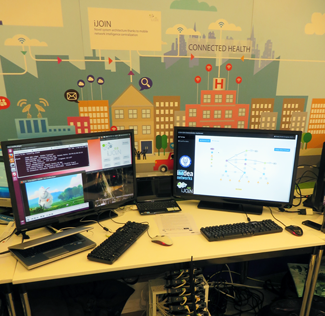 In his keynote at the MWC press conference on March 3rd, Günther Oettinger, explained the reasons that led the EC to launch the 5G Public Private Partnership: “With 700 million euro earmarked under the Horizon 2020 Research and innovation programme to get 5G up and running, while industry partners have committed to leverage the EU funding by up to five times, in one year of existence, this partnership has delivered very convincing results.” He then went on to invite congress goers to visit the demonstrations of the pioneering 5G research projects at the EC booth and at the corporate stands of key industrial players participating in these projects.

Amongst these research initiatives is iJOIN*, coordinated by IMDEA Networks Institute. This project involves twelve leading academic and industrial partners, and is headed by Dr. Albert Banchs, Deputy Director of the Madrid research Institute. iJOIN focuses on “small cell" technology, which is of key importance for taking advantage of limited and strategic resources, such as the radio wave spectrum.
Thus, this project covers one of the key factors at the heart of 5G success: “an innovative utilization of spectrum”, which Oettinger further described as “the essential resource for the wireless connectivity of which 5G will be the main driver”.

The iJOIN demo was visited by Oettinger, as well as by Andrus Ansip, EC Vice-President for the Digital Single Market, and several members of the EU Parliament, including Pilar del Castillo Vera, representative of the Group of the European People’s Party.

The Spanish research institute IMDEA Networks is one of the main leaders at European level in the field of 5G networks. IMDEA Networks is one of the few academic partners represented in the 5G-PPP Association and Partnership Board, and in the European Technology Platform NetWorld2020 Steering Board, which are the entities that lead the development of the European program in 5G technology.

* Interworking and JOINt Design of an Open Access and Backhaul Network Architecture for Small Cells based on Cloud Networks.

The iJOIN demo was visited by Günther Oettinger, European Commissioner for Digital Economy and Society, as well as by Andrus Ansip, EC Vice-President for the Digital Single Market, and several members of the EU Parliament, including Pilar del Castillo Vera, representative of the Group of the European People’s Party. Albert Banchs, deputy director of IMDEA Networks Institute, together with Peter Rost of NEC Europe Ltd. (industrial project partner), performed the presentation of the project’s research results up to date.
(Images 1 and 3 in this group are copyrighted by Juan Alonso)