The CROWD research project in the strategic domain of future communication and ICT services infrastructures has been selected by the European Commission (EC) to join the group of “early 5G precursor projects”. As such, it will contribute to the early showcasing of potential technologies for the future ubiquitous, ultra-high bandwidth “5G” infrastructure. The project has been included in the list of demonstrations at the European Conference on Networks and Communications (EuCNC) organized by the EC in June 2014, in Italy.

5G will be the first instance of a truly converged infrastructure, integrating IT and networks resources, and where wired and wireless communications will be undistinguishable. The potential benefits of such a scenario make this groundbreaking technology a key enabler of the global digital economy. European led telecommunications research is thus betting on the development of fifth-generation mobile networks to strengthen the competitiveness of the European economy and promote innovation and research that enable Europe to recapture the global technological lead.

5G advances will also pave the way towards the “softwarisation” of networks and ICT architectures, thus boosting the creation and development of new ecosystems in emerging areas, such as the Internet of Things (IoT). As part of this concerted European effort the goal of CROWD project is to design sustainable networking and software solutions for the deployment of very dense, heterogeneous wireless networks. Sustainability is targeted in terms of cost effectiveness and energy efficiency. Very high density means 1000x higher than current density (users per square meter). Heterogeneity involves multiple dimensions, from coverage radius to technologies (4G/LTE vs. Wi-Fi), to deployments (planned vs. unplanned distribution of radio base stations and hot spots).

CROWD is a European funded project running since January 2013 under the technical supervision of IMDEA Networks Institute, in collaboration with University Carlos III of Madrid, University of Paderborn (Germany), National Instrument, Alcatel Lucent France, the Turkish telecom operator AVEA, and the Italian provider of electronics INTECS.

Early results from the project have been published in top conferences and journals like IEEE INFOCOM and IEEE/ACM Transactions on Networking. The project has received an “Excellent” mark at the first year evaluation carried out by the European Commission Directorate General for Communications Networks, Content & Technology (DG CONNECT). 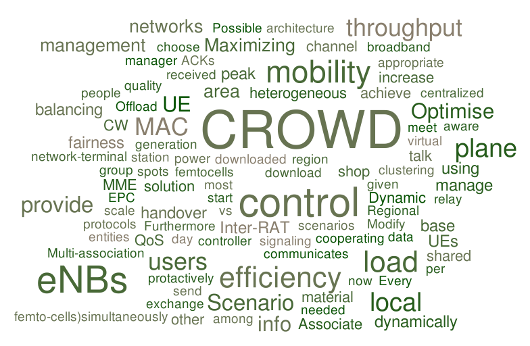