I think that my curiosity about things and my constant willingness to make them better pushed me towards research. I basically decided to try to become a researcher when I figured out that such a position could combine real world challenges while giving room for creativity and freedom of opinion. Working in an environment that is in constant evolution, with young people stepping out of their studies with fresh ideas, was also a big push.

Luck allowed me to become a researcher. I met Prof. Olivier Bonaventure when he was teaching Computer Networking, in Belgium. I’ve been seduced by the field and decided that I would work in this field. When doing my Master thesis under his supervision, I’ve been seduced by his vision on computer networks and the level of pragmatism that was driving his research projects, and we started to think about working together…

We have been very lucky to find a match of our objectives within a one-year project initiated by an actor of the Networking Industry. At that time, it was just about analyzing and solving a specific issue on a specific protocol implementation in their product line. The project got pretty successful, and its conclusions lead to both scientific contributions and impact on products. I ended up discovering the Internet Engineering Task Force (IETF), where our proposals and analyses are being discussed within some of their working groups. This aspect of my thesis helped me discover the guys and the companies that are doing the things that we researchers are talking about. 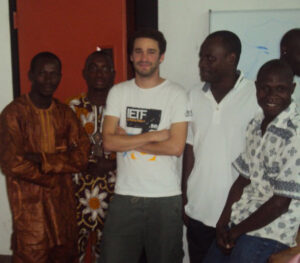 As we were constantly discovering new improvements to investigate, and as we had to take care of the engineering aspects of the proposals which were turning real, the project got extended on and on, and I ended up actually becoming a researcher shooting for a Ph.D. Thesis.

After my thesis, I obtained a Post-Doctoral research grant from the “Fonds National de la Recherche Scientifique”. I took advantage of it to broaden the scope of my research, notably by investigating economic aspects of the Internet architecture, using local search algorithms to perform traffic engineering in data center networks, and finding algorithms to support some new features within the Internet Service Provider routing protocol suite.

I had already visited Universidad Carlos III de Madrid (UC3M) when I was a student, for a course on mobile IP, and a couple of times as a researcher for European projects plenary meetings. I was giving a course on Computer Networks at UC3M a few months ago. I met a bunch of IMDEA Networks researchers and staff, as well as UC3M students following the course. In the middle of the week, I decided to apply.

The amount of creative people working in the same or very closely related field as mine, concentrated on a few square hectometers around Madrid, is close to be unique in Europe.

The fact of becoming a researcher in an independent research center, still keeping connection with the academia through a tight collaboration with UC3M was also looking like an ideal work environment.

The fact that IMDEA Networks is a multi-disciplinary initiative was also a key point to me. I’m expecting it to naturally broaden the scope of my research, use the experience of my field to contribute in some projects for which networking is not the main focus, and vice versa.

I will work on architectural aspects of the Internet, notably on the governance of the security mechanisms that are currently being pushed by some actors of this industry.

I would like to finally get an understanding of the Internet Routing Economy. We still do not know what are the games being played over there, and how the Internet is evolving with respect to the business run by its main actors. I think that this is damaging for both the quality of our research, as we don’t have a clear view of our research topic, and for the industry itself, as we observer business decisions made by some actors that are sometimes looking unreasonable.

Next to these two examples, I would like to carry out research with an impact on local and regional matters. I think that in these difficult financial and societal times, researchers should try and get their hands on real matters that substantially help people, and I think that an IMDEA Networks project succeeding to contribute to the welfare of the region would be very rewarding. I think that such locally integrated projects could also help me to integrate myself in this region.

6. Did you know Spain before joining IMDEA? What do you like best about Madrid?

I first went to Madrid when I was graduating for my Ph.D. to follow a course on a specific field of Computer Networks. I visited again a couple of times after for plenary meetings of European Projects we had with UC3M. I also went to Barcelona a couple of times for conferences and to meet UPC researchers.

Now that I’ve been living in Madrid for a few weeks, I slowly start to feel that I’m discovering it from the inside. But my view about Madrid changes on a daily basis. And this is what I’m currently fancying the most; Madrid’s diversity. I’m also enjoying the fact that neighbors seem to actually talk to each other, in the street, which is kind of a rare thing in Europe. I’m also discovering a new language. It is the first time I am pushed to learn another Latin language, and this is very exciting.