The future 5G Networks are going to transform the way we perceive and interact with the world around us. 5G Networks bring a combination of advances that will transform current reality into a “connected reality”, in which all things and every person are interconnected forming a united whole.

5G Networks will allow more than six million million systems to be connected, which includes all the planet’s inhabitants, and in addition to that, somewhere in the region of a thousand objects each. Each person will be permanently connected to their doctors, friends, colleagues, clients/suppliers and security services, but what is more, also to their car, their fridge, their favourite bakery, leisure centres, metro, airport, their home and, in short, every object that may be of interest to us. All these objects, in turn, will be connected, in such a way that a pallet, let us say, can “complain” to its source company that its delivery route is incorrect, and our boiler will be able to download software to make its operation more efficient. 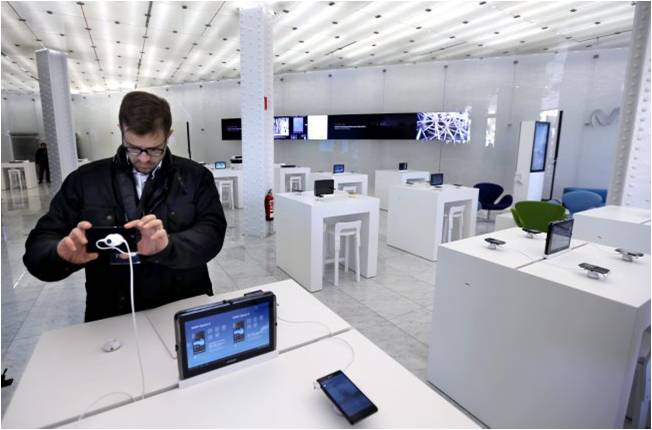 A visitor tests a mobile at the ‘Mobile World Centre’, at last year’s show.

The number of connected devices will be complemented by increased network capacity on three orders of magnitude. 5G Networks, therefore, will be capable of carrying 1000 times more mobile data than the 4G networks that are currently beginning to be deployed. Such a massive capability for communications will allow each person to access, send or exchange, quasi instantaneously, the sensations of their choice. Though research in 5G does not cover multimodal interfaces, the network is being designed so that these can be integrated. Augmented reality devices, brain wave interfaces, or the implantation of interface biochips will allow 5G network users to interact with each other and with all their connected devices, quite naturally, free from external devices, as an extension of their five senses.

The heart of this network will be based on the intensive development of current virtualization technologies, re-designing the network from scratch: this is what top scientists at Telefónica call “network deconstruction”. Convergence with “cloud computing” technologies will allow network control to be much more flexible and economical than at present, and better integrated with the services it supports and with telecommunications operators’ business processes. In this way, the time taken to deploy a new service in production will be reduced from the current 90 days to a much shorter term of around 90 minutes. This means that the range of supported services will be considerably more dynamic and tailored to the needs of users, both private and professional.

Direct exchanges of stereoscopic images, smells, tactile information, or as I have mentioned, brain waves will be possible from wherever we are. Because, counterposed to what happens with 4G systems, 5G Networks are designed for universal geographic coverage, with the added advantage of a more seamless service with regard to the relative positions of the base station and the edge of the cell. Mass MIMO systems and beam forming will be used to increase spectral use in order to achieve the target capacity with relative spectrum consumption well below that of today.

More economical use of energy is a further key element in 5G Networks. If we were to increase the network capacity by 1000 with today’s technology, the energy requirement would be so high that it could not be met. Therefore, technologies are being developed that run on just 10% of the energy used at present, in order to reduce the environmental impact derived from 5G.

5G Networks will lead us to a world in which distances cease to exist, and in which our sense of being and perceiving will blend with those of our fellow citizens and of the objects around us.