Where humans, animals and robots meet

To meet our everyday needs in an increasingly multifaceted technological world is a challenge that pushes researchers to find innovative tools using a multidisciplinary approach. We inhabit a globalized planet, made up of complex systems, where domains such as communications, business, healthcare, energy or transportation converge, interact and integrate. In this context, a thriving technology trend applies the concept of animal swarms or swarming to the development of complex systems that bridge the gap amongst disciplines as dissimilar as biology, robotics or networking.

The idea behind “swarm technology” is to create a system consisting of a group of heterogeneous elements (such as robots) and organize them, so that they interact (with each other and with the environment), and cooperate, in order to be able to perform tasks or solve problems of practical relevance that are outside their individual capabilities. Thus, from the combination of individual (even simple) agents emerges a more “intelligent” global outcome. The swarm combines physical control of individual entities with integration of their sensor data analysis and communication capabilities to achieve a cooperative system able to accomplish complex goals in a synergic manner. Monitoring, surveillance, mapping, tracking, disaster management and entertainment are a few of the potential applications of swarm technology.

IMDEA Networks Institute and ETH Zürich have signed a collaboration agreement for research and development on this area. The SWARMIX* project aims to lay the foundations for the design, implementation, and adaptive control of heterogeneous multi-agent systems that are composed of humans, animals, and robots. These systems, known as “mixed swarms”, will work in cooperation to solve distributed tasks that require a wide diversity of sensory-motor and cognitive skills.

The aim of this project is to provide each component of the mixed swarm with a high level of autonomy, in order to allow it to fully exploit its own unique skills and abilities. At the same time, it will set up close bidirectional interactions and information flows between all system components in order to ensure overall synergistic cooperation. The main novelty of SWARMIX lies in the joint integration of a possibly large number of humans, animals, and robots in tight cooperation as one single networked system with distributed control. 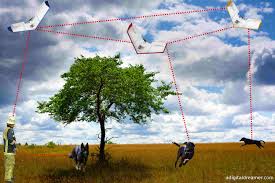 SWARMIX is financed by the Swiss National Science Foundation (SNFS) as part of the Sinergia project. As part of SWARMIX, the collaboration between SNSF, represented by ETH Zurich, and IMDEA Networks Institute was launched in November 2013 and will conclude in December 2014. Dr. Domenico Giustiniano, Research Assistant Professor at IMDEA Networks, will contribute to the project objectives and to the scientific dissemination of the results.

“The whole is more than the sum of its parts” (Aristotle)