Wireless technologies are more or less ubiquitous on land. Checking emails and messages on a smart cell phone, connecting a laptop to the WiFi and browsing the internet, or listening to music via a Bluetooth headset have become quite normal activities in the daily routine of almost everybody.

However, these types of wireless communications would not be possible in the salted waters of oceans and seas. In fact, a cell phone (of course, sealed in a waterproof bag) may still be able to operate within a few meters of depth, but once the surface is far enough, the signal would be lost completely. The same applies to other communication equipment, such as analog VHF radio or plain WiFi. For these reasons, it is not feasible to employ electromagnetic waves to communicate under water the way we do on land. Yet, there is a lot of interest around wireless communications in the oceans. Think, for example, of fraud fishing prevention: underwater sensors deployed in protected marine zones may detect the presence of unauthorized boats, track their movement, and wirelessly communicate it to authorities for prompt intervention. In underwater oil drilling areas, wireless sensors could detect accidents such as spills and infrastructural failures, and report before it is too late to intervene. Some sensors to do so already exist today, but they are mainly operated by means of waterproof underwater cables, which are very expensive to purchase, deploy and maintain, and therefore limit the extension of the system. Wireless underwater communications would help remote sensing and telemetry in general by immensely reducing infrastructural and deployment costs, hence increasing the extension and also the flexibility of underwater sensing systems. This benefit would then find many applications in littoral surveillance, water science and in the offshore industry.

Electromagnetic waves cannot be used to communicate under water, but communications can be achieved via light signals (which have anyway very limited reach, at most 20 m) or via another, very natural means: pressure waves, that is, sound.

Actually, many species of ocean animals use sound for communication and prey localization. This gives a strong clue that sound is a viable physical means for underwater communications. Furthermore, sound has many desirable properties under water. It propagates to long distances, up to several km: for example, this means that long underwater oil and gas pipelines and large protected marine areas could be covered with just a few sensors. Finally, sound supports digital communications sufficiently to transfer the amount of data typically required by underwater applications: hence, it becomes possible to communicate by extending well developed digital communication techniques already used in terrestrial radio networks. This became clear as early as the beginning of the 20th century, when the first sound-based ice detection system (designed in the aftermath of the RMS Titanic wreck in 1912), as well as the first active SOund Navigation And Ranging (SONAR) appeared.

As underwater sound engineers soon became aware of, sound also has several drawbacks. It propagates very slowly (about 1.5 km per second, much smaller than the propagation speed of electromagnetic waves in air, which is about 300.000 km/s); its propagation patterns in water are complex, subject to many echoes and significant reverberation, whose intensity strongly depends on the location in the world, and it changes on a daily and even a seasonal basis. This requires complex signal processing in order to extract a decodable message; finally, the nominal speed at which data can be transfered is currently only at most a few kbps, about 10.000 times slower than ADSL systems, and slower than the  telephone line modems used in the '90s.

In these conditions, where the quality of communications changes considerably over time, designing an autonomous, self-organizing underwater network requires to solve many structural challenges. First of all, heterogeneity: a typical network, as shown in Fig. 1, may contain fixed nodes (bottom-mounted, or moored at different depths), mobile nodes (called AUVs, for Autonomous Underwater Vehicles, towards the top-right in the figure), which may be densely deployed (for example, near the two wells at the bottom) or sparsely deployed (for example, along the pipeline). In addition, the components of the network should be sufficiently autonomous to discover their neighbors and seek their collaboration when sensed data has to be transferred to a far destination that is not within range of the sender. The network should also be ready to react to specific circumstances (for example, the detection of an intrusion, or an environmentally dangerous event) and prioritize the transmission of the related data. Mobile nodes, if present, should optimize their trajectory not only to carry out their own mission, but also to favor the flow of communications in the network; finally, all nodes should be able to adapt to an error-prone and very time-varying communication quality.

Due to these challenges, the scientific community working around this field perceives successful experiments at sea as the only proof that a devised solution actually works in practice. This leads research groups to collaborate on complex experiments, sometimes in cold early springs in northern Europe, (Den Helder, the Netherlands, April 2013, Fig. 2), and sometimes in warmer Norwegian fjords (Trondheim, Norway, May 2013, Fig. 3).

The next step in underwater communications and networks is the capability to use communications to coordinate a group of AUVs (a so-called “swarm”) in real time, having them keep formation, scramble to collaborate to a common mission, or simply to aid navigation and avoid, for example, obstacles and collisions. Another very important technological advancement regards the “bigger brothers” of the AUVs, named Remotely Operated Vehicles (ROVs). These are complex systems, with advanced navigation capabilities, and with many attached tools, such as pliers, robotic hands, sensors, and also cameras that allow an operator to see “with the eyes” of the ROV. These systems are very versatile, but also very expensive. Therefore, they are controlled remotely via a cable that provides both a data link and a power supply string. The cable can greatly limit the vehicle's maneuverability: hence a dependable solution to drive a ROV wirelessly from a distance of up to 100 m, possibly leveraging on both acoustic and optical communications, would be a breakthrough for the marine industries and authorities (Fig. 4). We expect very significant results along these lines within the next few years.

The ubiquitous wireless networking group at IMDEA Networks, led by Dr. Paolo Casari, is active on both fronts thanks to several contacts with the University of Padova as well as with underwater communications research centers in Europe and in the US 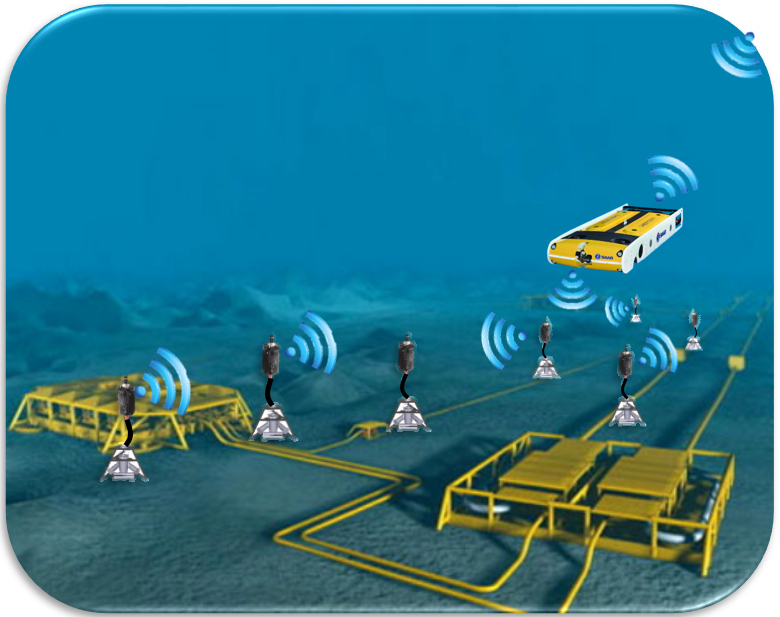 Fig. 1: an example of underwater network for pipeline and oil well monitoring.

Fig. 2: deploying underwater nodes in the North Sea, in the Netherlands (April 2013).

Fig. 3: warmer networking scenario: an experiment in the Trondheim fjord (May 2013).

Fig. 4: the wireless remote control of a ROV from an offshore platform.