The FI-PPP meets in Madrid

With an ambitious research agenda focused on next-generation mobile communications, the Advisory Board of the Future Internet Public-Private Partnership (FI-PPP) and a representative of the European Commission met last week in Madrid. In the meeting, hosted by IMDEA Networks on the 20th and 21st of May at University Carlos III of Madrid (UC3M), the advisory board discussed possible synergies and collaborative actions between the FI-PPP and the 5G Infrastructure PPP.

The FI-PPP is a European-scale platform for Internet-enabled innovation. It has been in operation for several years as part of the EU Seventh Framework Program (FP7) with the aim to accelerate the integrated and harmonized development and adoption of Future Internet technologies in Europe, advance the European market for smart infrastructures, and increase the effectiveness of business processes through the Internet. The recently launched 5G PPP is a 7 billion € research action jointly funded by the private sector and the European Commission, which will operate over the period 2014-2020 within the new H2020 program. The 5G PPP, working in association with the European Technology Platform NetWorld2020, spearheads the EU effort to produce and influence international standards for next-generation cellular networks.

Arturo Azcorra, Director of IMDEA Networks, is a member of both the Advisory Board of the FI-PPP and the Steering Board of the 5G PPP. The added value brought to IMDEA Networks from its participation on these influential forums reinforces its international role in advanced telecommunications research. Since 2006, the Madrid-based organization has performed cutting-edge networking science aimed at achieving excellence in ICT Infrastructure and network research. The ICT sector is a key catalyst for industrial, societal and environmental progress, with a vital socio-economic impact on Europe’s future. 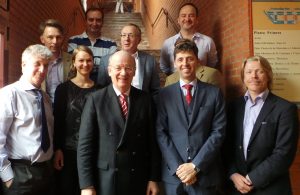