IMDEA Networks participates in the first edition of Patents for Innovation

IMDEA Networks has participated in the first edition of P4i – Patents for Innovation, an event that aims to become the largest European meeting point for Innovation and Technology Transfer. Marta Dorado, Deputy Operations & Communications Manager, and Elvira Conti, Project Manager, represented the institute from the innovation space of the Community of Madrid in the Nave (Madrid) on October 26 and 27.

P4I 2022 was born as a forum for technological innovation and also as a patent fair, thus allowing the creation of a market for the transfer of research results and the purchase and sale of scientific patents. It was attended by 100 universities and R&D centers, European consortia such as CIVIS, 110 companies interested in science, investment groups, or companies dedicated to patent drafting.

The welcoming ceremony was led by Fidel Rodríguez Batalla, Deputy Regional Minister for Universities, Science and Innovation of the Regional Government of Madrid, Amaya Mendikoetxea Pelayo, Rector of the Universidad Autónoma de Madrid, and Félix Zamora, Vice-Rector for Transfer, Innovation, and Culture of the same university. Rodríguez Batalla explained that the Regional Government of Madrid is working to “put the R&D&I of the universities and research centers such as the IMDEA Institutes at the service of society. Without science we cannot continue on the path to prosperity”.

Likewise, the UAM President pointed out that the challenge is that “research work is returned to society”. And that is the reason why they have developed the digital catalog of patents, which is an extensive database, and this annual fair to create innovation ecosystems.

Rodríguez Batalla and the rector of the UAM visited our stand to learn more about the work we do in technology transfer and how we transfer the results of our research to society and industry. The general director of Research and Innovation of the Community of Madrid, Ana Isabel Cremades, has also visited our stand and presented at P4i the network of companies, universities, and research centers that carry out technology transfer in the region. Finally, the IMDEA institutes were visited by Diana Morant, Minister of Science and Innovation, who was able to see some of the prototypes on display. 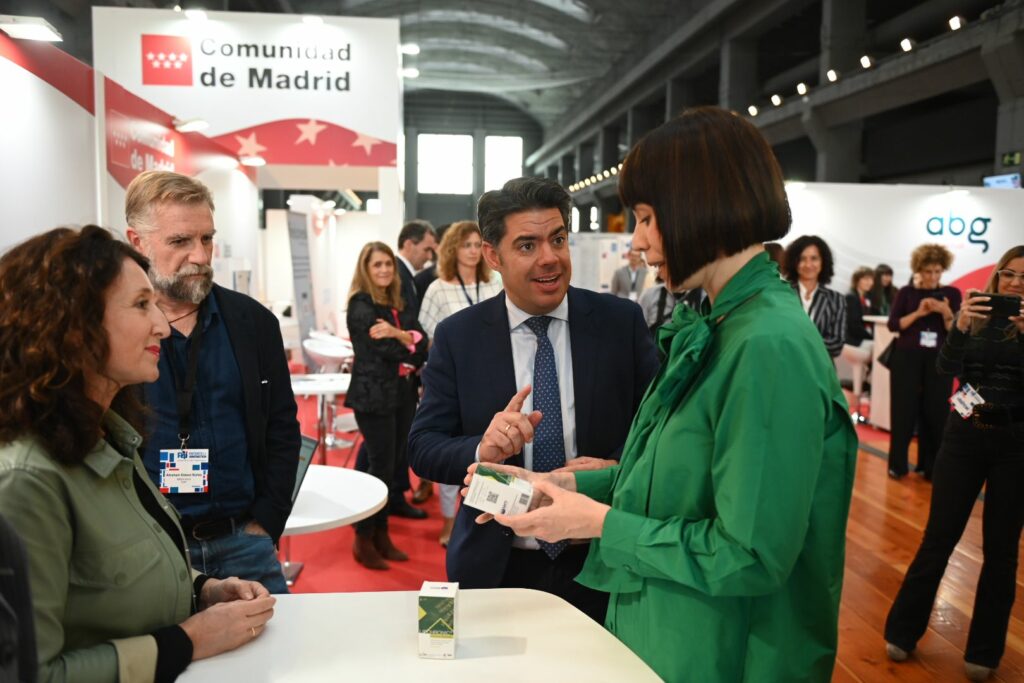 On the other hand, the more than one thousand participants enjoyed meetings, a wide variety of round tables, plenary sessions, B2B sessions, and pitches on topics of great interest, such as the commercialization of patents, the value of licenses for companies, and much more. In addition, case studies of spin-offs born in the heart of universities have been shown. In addition to all this, more than 360 patents of which the centers are interested in transferring and with relatively high TRLs were presented, and another thousand patents were available online to maintain the interaction after the event.

The director of IMDEA Materials, José Manuel Torralba, was in charge of presenting the IMDEA institutes in a pitch, which he described as “talent that is transformed into innovation”. He spoke about the pioneering projects we have been working on at the different centers since their creation 15 years ago, as well as highlighting their main scientific and technological advances.

The event was closed by the Minister of Science and Innovation, Diana Morant, who announced the creation of a state platform for innovation and transfer with a specific section for patents and a service for the commercialization of academic patents. In this way, it seeks to connect companies with universities and research centers. “This fair contributes to bring the supply and demand of knowledge closer together, making visible results that are useful for companies and society. It provides a database to search for promising technologies of our public system that can be the germ of new scalable proposals similar to the one proposed by the Ministry,” she said.

At the same time, she stressed: “From the Government of Spain and the autonomous governments we believe that the great challenge is to take the step and promote the patent culture in our country, to transform the solutions of the academic world into industrial products, a phase where we still have a gap. There is still a lot of work to do, but in 2021 Spain registered its record at the European Patent Office, with an annual growth of 10%, above the EU average of 3%. We have to follow this course, society needs new ingenuity for new challenges, in a critical time we need to invent a better tomorrow (…) Patents generate business opportunities and economic impact, but we must also orient them towards the social benefit, especially those that were financed with public money”.