I’ve always felt a strong curiosity to learn, understand, and reproduce the natural phenomena that allow remote distance communications. I decided to be a researcher when, during my master study I met my future Ph.D. advisor. He showed me how to use my natural “curiosity” to investigate the behavior of telecommunication networks from a physical perspective, i.e., the phenomena that allow the flow of information, as well as from a protocol perspective, i.e., the rules that machines follow to exchange messages. When I implemented my first, simple, “IP network simulator” I felt somewhat like the sensation that I actually had the tools and the capacity to “govern” and ameliorate the communication processes, not just understand them.

I began my research activity during my master at University of Palermo, Italy. At the beginning it was just programming a network simulator in C++ code, then I started with introducing protocol modifications and I decided to enroll in the Ph.D. program of that university to continue my studies about mechanisms for quality of service in Internet. After the Ph.D., I had some experience as a post-doc researcher and I collaborated with universities and research centers in Italy first, then in Europe and in the United States of America. I’ve travelled a lot, working in many places and attending many conferences, thus enjoying a number of different cultures. My friends were always making jokes of me travelling around the world! I’ve been with University of Roma “Tor Vergata”, working in a large European Network of Excellence named SatNEx, where I had the opportunity to meet the worldwide élite of the satellite communication research community. Then I was back with University of Palermo as postdoc, but I spent one year and a half as visiting scholar at the ECE department of Rice University, Houston, Texas. Thanks to this long visit, I turned my research curiosity towards wireless networking as a mean to combat the digital divide. Finally, before moving to Madrid, I spent 14 months in France, with the MAESTRO team at INRIA Sophia Antipolis, in the wonderful Côte d’Azur. There, I strengthened my analytical skills by working on models for low power consumption in wireless cellular networks.

Upon having travelled so much for more that 4 years after the completion of my Ph.D. program, I was looking for a stable position in a research center. My target was a research center with good growth potentials, both for me and for the institution, and preferably in Europe. So when I heard of IMDEA Networks, during a scientific meeting, I was immediately attracted by the idea of working with well-known researchers, involved in active collaboration with the most important research institutions all over the worlds, collaborating with international students, and pursuing my own research dreams. I also thought that charming Madrid’s atmosphere would have helped me to feel like at home… and I was perfectly right!

IMDEA Networks is a young research center with high ambitions and great potentials. It offers more than the basic tools to perform analytical and experimental research without requiring its members to be drastically loaded with teaching duties. At the same time, IMDEA Networks offers to its researcher the possibility to work with open-minded international students and does not put any limit to the research objectives of anybody. Therefore, I thought that this was the perfect environment for beginning an innovative long-term research activity.

In the past, I’ve been working in both wired and wireless networking, to provide enhanced quality of service to the users of the Internet. Today, the research is turning to be very sensible to energy consumption issues, to the environmental impact of communications technology, which is a result of the limited energy efficiency of communication protocols. That is the reason why I joined two particular research lines here at IMDEA Networks: wireless networking and green networking. I believe that studying, deploying and testing energy-aware high-speed networks and efficient wireless systems, are of paramount importance for responsibly driving the evolution of telecommunication systems of tomorrow’s world.

6. Did you know Spain before joining IMDEA? What do you like best about Madrid

I visited Spain a few times before joining IMDEA Networks, and I enjoyed the fact the this is a Mediterranean country with a Mediterranean culture. I found that there are many similarities with Sicily, my land of origin. It’s probably because of the sun, the color of the land, the food, and the warmth of people. Moreover, Madrid is a wonderful example of balance of industrial development and artistic innovation, with large green spaces to explore and exploit for relax, in the city and all around in the region. 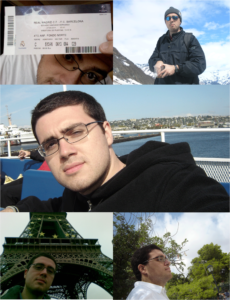 Vincenzo Mancuso is a football fun. He has visited Alaska, Seattle and Paris, amongst others. He enjoys Madrid city parks.