ACM SIGCOMM is the leading venue on architectures, protocols, technologies, and applications of computer networking and data communication

ACM SIGCOMM 2018 met in Budapest on August 20-25. The first visit to Eastern Europe became an unqualified success for the flagship annual conference of the ACM Special Interest Group (SIG) on Data Communication. Encompassing a variety of traditional and newly introduced events, the six-day conference program attracted about 200 more attendees than expected.

SIGCOMM 2018 received around 750 registrations overall, with about 700 people registered for the 3-day main conference. The conference hosted 12 workshops and 6 tutorials, involving about 500 participants in total over the 2 dedicated days of the program.

The revenues of SIGCOMM 2018 exceeded half a million Euros and enabled the organizers to provide the attendees with highly memorable experiences, such as the welcome reception held during spectacular national-holiday fireworks, main conference in the splendid (and historically important) Vigadó Concert Hall, and banquet as a cruise on the Danube. Appreciating the meticulous organization, the attendees provided overwhelmingly positive feedback and abundantly expressed their gratitude both verbally and in writing. A number of participants claimed that the conference was the best SIGCOMM ever. 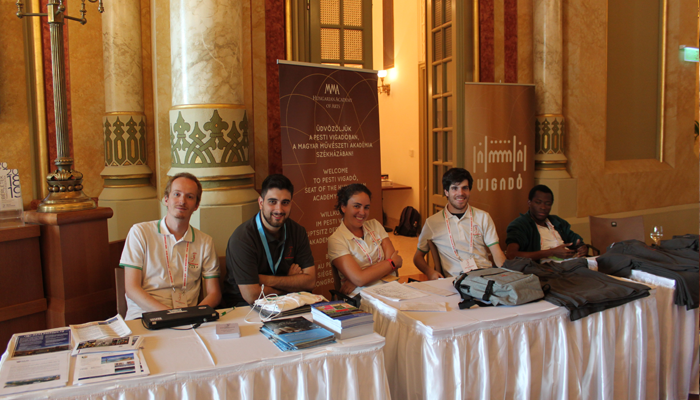 A group of IMDEA Networks PhD Students at work during the conference. 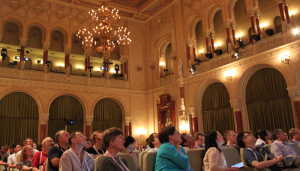 The main conference being held in the Vigadó Concert Hall 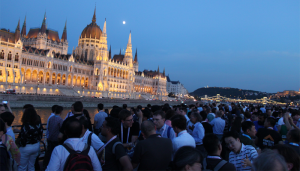 The banquet cruising the Danube