FLAVIA project set to build adaptability into the wireless Internet

Institute IMDEA Networks is to participate in FLAVIA, a new project that aims to enable wireless networks to rapidly evolve to suit new demands.

The importance of wireless networking for the future of the Internet is growing at a fast pace as the spread of mobile devices accelerates. But today’s wireless networks are unable to rapidly adapt to constantly changing contexts and service needs, principally due to their rigid architectural design—in particular the reliance on a layer-based abstraction model based on pre-designed link services. With this in mind, Institute IMDEA Networks, a research institute backed by the Madrid Regional Government, has announced its participation in the FLAVIA project (FLexible Architecture for Virtualizable wireless future Internet Access), which involves a paradigm shift from pre-designed link services to programmable link processors. FLAVIA aims to expose flexible programmable interfaces, enabling service customization and performance optimization through software-based exploitation of low-level operations and control primitives.

Institute IMDEA Networks’ contribution, carried out jointly with University Carlos III of Madrid, will concentrate on MAC configuration and design, with a particular focus on the specification and prototyping of 802.11 modules and programming interfaces, and on developing innovative approaches for enhancing contention-based system performance. The Institute’s work will draw on its current involvement in the CARMEN project, which aims to improve the cost-effectiveness of deploying heterogeneous wireless mesh networks. The Institute is also contributing to the development of video-transport mechanisms in the recently announced MEDIEVAL project, and these are to be considered as examples of enhancements that could be implemented in the FLAVIA architecture. 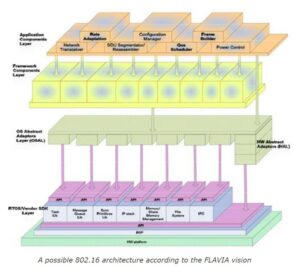 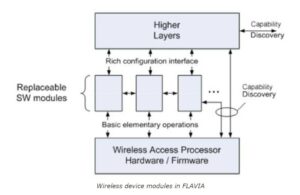