The future of the Internet is social

IMDEA Networks Institute announces the successful completion of the European research project eCOUSIN (enhanced COntent distribUtion with Social Information). The research findings have won the approval of European Commission reviewers for their successful account of the project’s research objectives.

The main goal of eCOUSIN was to design an innovative network architecture that exploits the growing popularity of online social content and its interdependencies to improve the efficiency of the network and to increase end-user satisfaction. The project focused on data collection and analysis, the scalability of network infrastructure, linking network and content-related functionalities, and social information-driven algorithm design.

Dr. Joerg Widmer, a Research Professor at IMDEA Networks, has led the scientific work assigned to the Madrid-based research institute. IMDEA Networks played a major role in the project consortium as, besides contributing to all the technical work packages, it led and supervised the implementation and assessment activities. In particular, the Institute’s technical contributions focused on an advanced monitoring technique to enable reliable forecast of the network performance and, in turn, to increase both the network capacity and the user’s satisfaction. In fact, network prediction makes it possible to avoid performance outages by planning solutions before problems become unavoidable, or, if resource availability allows for it, users can take advantage of temporary profitable conditions to balance future quality degradation.

More specifically, IMDEA Networks’ achievements in the eCOUSIN project included: passive and lightweight measurement tools for mobile networks [1]; performance models and predictors for mobile networks [2]; and algorithms for resource allocation optimization [3-4]. All major achievements have been validated and showcased during the project and at international conferences [5], thus promoting their impact on both the industrial and scientific domains. 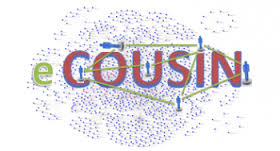 eCOUSIN was an EU FP7 project with 9 partners from 6 different countries (France, Germany, Belgium, Spain, Italy, United Kingdom): two network operators, two vendors and manufacturers of telecommunication equipment, together with one research institute (IMDEA Networks Institute) and four universities (amongst them University Carlos III of Madrid). Its duration was 30 months, from November 2012 to April 2015. You can find more information at http://www.ict-ecousin.eu.