Internet has nowadays become a booster of development. This knowledge sharing space allows people to communicate with ease anywhere and anytime, and it considerably reduces the prices of services while opening new horizons for progress: e-government, e-education, telemedicine, e-commerce, research, e-companies, remote assistance, e-tourism, etc. Its adoption and rapid expansion lower the rate of poverty in some developing countries, hence considered to be emergent.

In the last decades, researchers worldwide have worked to figure out how the interconnection of networks that forms the Internet is evolving. Their objective has been to collect raw data on the paths followed by its traffic. To this end, previous work has mainly focused on designing well tested algorithms to discover and measure the Internet topology.

Several projects involving public and private ownership of measurement infrastructures for monitoring Internet traffic have been set up and are currently in use. Most of these projects, while targeting the whole network, have as a common specificity the under-involvement of African countries. As a consequence, although the results released have expanded our knowledge of the shape of the Internet, the lack of knowledge about African (and especially West African) Internet connectivity still persists.

Such knowledge is however becoming critical to support initiatives from African Network Operators to establish new links among each other. These initiatives mainly aim to help Internet Service Providers (ISPs) save on costs, keep local traffic local, reduce delays, and by doing so improve performance, QoS and user experience.

Despite the sensitivity of the agreements, topologies, etc…. impacting West African network operators and their stakeholders with regards to mutual competitiveness, they are all now seriously taking stock of the impact that the lack of reports on West African Internet has on their decision making capacity. It is obvious that measuring relevant data in West Africa is the only way to understand the network topology within this region and to evaluate the real impact of new network infrastructures on the Internet topology. In this direction, the main objective of a project recently launched by IMDEA Networks (‘Mapping and Measuring West African Internet’) is to deploy a measurement infrastructure allowing the collection and analysis of data on Internet traffic paths within the region.

The goal of this 3-year enterprise is two-fold. First, it will provide a snapshot of Internet connectivity, highlighting the way ISPs in West Africa interconnect as well as how they connect to other countries in the continent. Second, the evolution of such interconnections will be studied to show the impact of the initiatives aimed at improving the Internet ecosystem in the region.

This study is conducted by a research team of IMDEA Networks headed by Dr. Pierre Francois, Research Assistant Professor at the Institute, and it involves network operators from Benin, Togo, Niger, Burkina-Faso, Nigeria, Ghana, Cȏte D’Ivoire, etc. The project will operate from October 2013 to October 2016. 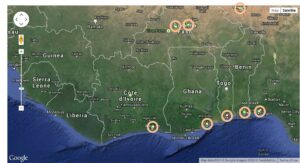