Read more
IMDEA Networks › What's new › Events agenda › What do opportunism, data mining and coordination have to do with system-level optimization of wireless networks?

What do opportunism, data mining and coordination have to do with system-level optimization of wireless networks? 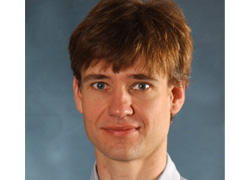 We present a system-level framework to mitigate interference using coarse grained coordination of transmissions across base stations. Our approach is based on collecting and mining measured data capturing a user population’s diversity in sensitivity to interference. The talk introduces the abstractions and optimization framework we have devised to enable this type of coordination. The talk is in two parts addressing what we deem to be key areas of inquiry.

1. Benefits of Traffic and Environment Aware Resource Management After briefly presenting the key components of our approach, we turn to considering the likely benefits of system-level optimization that is traffic and environment aware. Is it indeed important to be sensitive to the traffic and environment? Might it not suffice to simply use static allocations, say based on assuming uniform user populations, combined with dynamic scheduling? We present a subset of our extensive system-level simulations, which show reductions in file transfer delay ranging from 20-80%, depending on the traffic loads, as compared to a simple baseline not unlike those in the field today. We demonstrate that substantially more uniform coverage can be achieved while reducing average power consumption by up to 45%. In particular, we explore the benefits of traffic and environment aware coordination for systems subject to clustered traffic loads, e.g., due to spatial hotspots.

2. Dealing with Dynamic Inter-cell Coupling. We examine the role of interference induced coupling in optimizing wireless systems. This coupling among system loads can substantially affect the performance terminals will see. Even when the system is highly loaded, i.e., the base stations are almost always busy so might appear to be approximately decoupled, we find that dynamic coupling can play a dramatic role in dictating performance. We show that a more careful optimization of coordinated schedules which captures, at least in part, the effects of dynamic inter and intra cell interactions substantially improves performance. If time permits, we will discuss some additional aspects of user scheduling, reinterpreting our framework for system level coordination in terms of artificially creating and optimizing time varying capacities across user classes for opportunistic scheduling.

Who is Gustavo de Veciana?

Gustavo de Veciana is the Temple Foundation Professor in Electrical and Computer Engineering at the University of Texas at Austin where he served as Director and Associate Director of the Wireless Networking and Communications Group (WNCG) 2003-2007. He received his B.S., M.S, and Ph.D. in electrical engineering from the University of California at Berkeley in 1987, 1990, and 1993 respectively. His research focuses on the design, analysis and control of telecommunication networks. Current interests include: measurement, modeling and performance evaluation; wireless and sensor networks; architectures and algorithms to design reliable computing and network systems. Dr. de Veciana has been an editor for the IEEE/ACM Transactions on Networking. He is the recipient of a 1996 National Science Foundation CAREER Award, co-recipient of the IEEE William McCalla Best ICCAD Paper Award for 2000, and co-recipient of the Best Paper in ACM Transactions on Design Automation of Electronic Systems, Jan 2002-2004.