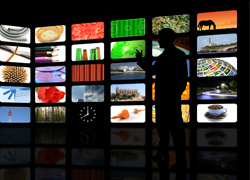 Rate Allocation for Layered Multicast Streaming with Inter-Layer Network Coding Abstract Multi-layer video streaming allows to provide different video qualities to a group of multicast receivers with heterogeneous receive rates. The number of layers received determines the quality of the decoded video stream. For such layered multicast streaming, network coding provides higher capacity than multicast routing. Network coding can be performed within a layer (intra-layer) or across layers (inter-layer), and in general inter-layer coding outperforms intra-layer coding. An optimal solution to a network coded layered multicast problem may require decoding of the network code at interior nodes to extract information to be forwarded. However, decoding consumes resources and introduces delay, which is particularly undesirable at interior nodes (the routers) of the network. In this paper, we thus focus on the inter-layer network coding problem without decoding at interior nodes. We propose a heuristic algorithm for rate allocation and code assignment based on the Edmonds-Karp maximum flow algorithm and perform simulations that show that our algorithm may even outperform other heuristics that do require decoding at interior nodes.

Who is Joerg Widmer?

Since September 2010, Joerg Widmer is at Institute IMDEA Networks where he currently is a Chief Researcher. From June 2005 to July 2010, he was manager of the Ubiquitous Networking Research Group at DOCOMO Euro-Labs in Munich, Germany, working on several projects in the area of wired and wireless networking. Before joining DOCOMO Euro-Labs, he was senior researcher in the group of Prof. Jean-Yves Le Boudec at EPFL. There, his main research focus was on UWB networks and MAC layer design as well as network coding in wireless networks. Joerg Widmer received his M.S. and PhD degrees in computer science from the University of Mannheim, Germany in 2000 and 2003, respectively. In 1999 and 2000 he was a visiting researcher at the ICSI Center for Internet Research in Berkeley, CA, USA.

You can find more information about Joerg Widmer and his publications at: http://fourier.networks.imdea.org/~joerg_widmer/