What can science and technology contribute to police work? Who is more inquisitive, a scientist or a police officer?

Although according to the scholars of the subject he was not the first one, Sherlock Holmes is indeed the best known fictional detective of all time. And his fame is more than justified. Intelligence, observation skills, unmatched ability for inductive and deductive reasoning and broad scientific knowledge, is what defines the brilliant Sherlock Holmes.

In Holmes and all other fictional ––and non-fictional–– detectives who have followed him, we find clear examples of how advances in scientific research and advances in the police work have occurred in parallel; that in each historical moment, the most advanced scientific knowledge available has been used in crime scene analysis.

On the afternoon of Friday, September 29, between 6:00 p.m. and 9:00 p.m., the auditorium of the Residencia de Estudiantes de Madrid will meet with researchers from the IMDEA Water, Food, Energy, Materials, Nanoscience, Networks and Software Institutes to show us the important role that scientific development plays in police work. Seeing how they unravel a crime scene, very different from their usual working environment, we can verify that analyzing DNA samples serves to identify the killer and also to find out if we have a genetic propensity of developing certain diseases. We will also learn that studying materials and simulating their behavior allows us to manufacture safer and lighter things, to produce energy more efficiently and also to check whether the vase or a tiny piece of material (which we cannot identify with the naked eye) found beside the victim, may or may not have been the homicidal weapon or part of it. Or to take another example, we will see that it is essential to have experts capable of analyzing everything down to the last bit of memory of the computer or the mobile of a victim or his/her murderer.

In Estudio en Escarlata, the first of the books dedicated to Holmes and Watson, Sir Arthur Conan Doyle described the relationship between science and police work very well and gave a telling example of how a scientific breakthrough can revolutionize police investigation. In the scene in which Holmes and Watson first meet each other, the former is over the moon because he has discovered a reagent that is precipitated only by hemoglobin. Watson does not understand Holmes’ enthusiasm and describes the discovery as something interesting from a chemistry point of view but with dubious practical usefulness. Sherlock’s response shows him how wrong he is:

By God, this is the most useful finding in the field of Legal Medicine that has taken place in recent years. Look: it provides us with an infallible test for discovering bloodstains. […]. Criminal cases always centre around the same point. Sometimes a man is suspected of a crime months after the crime has been committed; their suits and white clothes undergo tests: some brownish spots appear. Are they blood, mud, rust, or fruit stains? Such an extreme has plunged more than one expert into confusion, and do you know why? Due to the lack of a reliable test. Sherlock Holmes has now provided that test, and the path is clear for the future.

That today this possibility has been overcome, that we are able to know without any doubt not only that it is a blood stain, but to whom this blood belongs, is further proof of the important role that science plays in forensic investigation.

Returning to the most famous detective-scientist of all time, his genius, originality and dedication to work, did not end here. As Watson described, he cared only for what could help him in his work. He was therefore familiar with the practical aspects of English law, and yet his knowledge of Literature, Philosophy, or Astronomy was void (Watson was shocked to learn that he did not even know that the Earth revolved around the Sun). His knowledge about Politics was scarce; and those of Botany were patchy: he knew all there was to know about belladonna, opium and poisons in general, yet absolutely nothing about gardening. Something similar happened with Geology, about which he had practical but restricted knowledge: at a glance he could distinguish one geological soil from another, and was able to recognize which part of London its owner had been walking through by the mud stains on his/her trousers. He had a deep knowledge of Chemistry and as for Anatomy, his knowledge was exact but not very systematic. And to conclude, what Holmes was a real expert in, is what Watson called tabloid literature: he seemed to know all the details of every macabre fact that had happened in his century.

Recognizing that between reality and fiction there is usually a great distance, the truth is that some of the features that define Holmes and his method of work, resemble those of a scientist and also those of a police investigator. Both draw conclusions by contrasting what they observe with their previous knowledge. Both of them turn to science, or rather, to various sciences, to answer questions that until then they didn’t have the answer to. In short, both use all their talent to solve mysteries.

The European Researchers’ Night in Madrid 2017 coordinated by the Fundación para el Conocimiento madrimasd, is an action framed within the European Horizon 2020, programme, which is held in more than 300 European cities at a time. Around 30 scientific institutions in Madrid are participating in this edition, including the IMDEA Institutes. 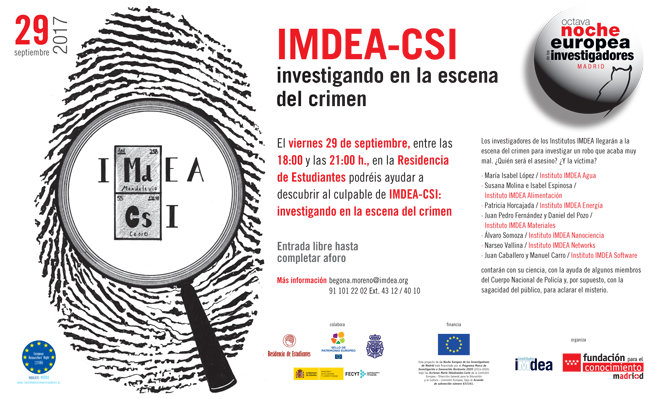 Detailed schedule:
18:00 – 20:00 h. The Salón de actos de La Residencia de Estudiantes will become the scene of a robbery that has gone wrong. Researchers from IMDEA Institutes will come to the crime scene to contribute their “grain of science” to the resolution of the mystery: what has the thief taken? Who is the victim? And the murderer.