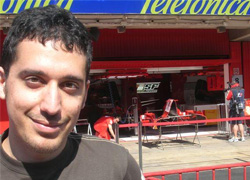 “ADSL is becoming the standard form of residential and small-business broadband access to the Internet due, primarily, to its low deployment cost. These ADSL residential lines are often deployed with Access Points (AP) that provide wireless connectivity. While the ADSL technology has showed evident limits in terms of capacity, the short-range wireless communication can guarantee a similar or higher capacity. Even more important, it is often possible for a residential wireless client to be in range of several other APs belonging to nearby neighbors with ADSL connections. We introduce ClubADSL, a prototype wireless station that can connect to several multi-frequency APs in range and aggregate their available ADSL bandwidth. ClubADSL achieves a fair bandwidth among the concurrent stations and minimizes the impact of end-to-end latency on the system performance. We show the feasibility of such a system in seamlessly transmitting TCP traffic, and validate its experimental implementation over commodity hardware in controlled scenarios.”

Who is Domenico Giustiniano?

Domenico Giustiniano received the MSc degree in Electronic Engineering from the University of Palermo, Italy, in July 2003, and the PhD degree in Telecommunication Engineering in March 2008 from the University of Rome Tor Vergata, Italy. During his MSc thesis, he visited for 8 months the TAIT department, University of Ulm, Germany. In 2004, he worked as research engineer at the TTI Department, University of Palermo, and then moved to the University of Rome Tor Vergata, Italy as PhD student. He spent 2007 as a visiting PhD student at Hamilton Institute, Maynooth, Ireland, where he was involved in a project with Intel Research, CMU Pittsburgh, USA, that he visited during May 2007. In March 2008 he moved to Telefonica Research, Barcelona, Spain, where he is currently a junior researcher. His research activity has been mainly focused on wireless networks and particularly on theoretical work on CDMA/MIMO signal processing and experimental research on small/large scale 802.11 systems.