The research by the NetEcon group targets significant results in both understanding the current Internet interconnection structure and suggesting improvements for the future Internet. The Internet economic structure is typically modeled on the level of ASes (Autonomous Systems) interconnected via transit and peering agreements. With a transit interconnection, the customer pays the provider for global Internet connectivity. With a peering interconnection, two ASes exchange traffic belonging to them and their transit-customer cones; the traffic exchange is commonly done at IXPs and does not involve financial settlement. While researchers typically infer Internet structural properties from network measurements, one of our early contributions was an accurate algorithm for inferring the provider-free ASes, i.e., those few ASes that reach the entire Internet without paying anyone for transit [Networking 2012].

Our work on remote peering constitutes an example of research that opens a new direction in Internet economics [CoNEXT 2014]. Remote peering is an interconnection where an AS reaches and peers at a distant IXP via a layer-2 provider. While the scientific community mostly overlooked the phenomenon, this interconnection type emerged massively over the past decade and has significant practical implications, such as a need for representing the Internet economic structure on both layers 2 and 3. Our first systematic study of remote peering revealed its substantial presence at 22 IXPs worldwide, used RedIRIS data to estimate how much transit-provider traffic an AS can shift to remote peering, and analyzed economic viability conditions for remote peering.

Complementing the studies of the current Internet structure, we develop economically sound mechanisms for improving the Internet connectivity. In particular, we proposed CIPT (Cooperative IP Transit), a multilateral interconnection for transit customers to reduce their costs [Transactions on Networking 2014, CoNEXT 2011]. CIPT leverages the economies of scale in Internet transit. In CIPT, a group of ASes pools their transit-provider traffic together to buy transit in bulk and uses the game-theoretic concept of Shapley value to distribute the aggregate cost savings among the individual ASes. Based on traffic data collected at European IXPs, our evaluation determined a significant potential for transit customers to reduce their costs by using CIPT. Our other proposal that leverages the economies of scale in Internet transit is T4P (Transit for Peering), a hybrid bilateral interconnection [NetEcon 2012]. The increasing heterogeneity of ASes, e.g., their specialization into content providers and eyeball networks, has prompted demands of financial compensation for maintaining a peering interconnection. In their turn, such demands fueled interconnection conflicts and network-neutrality debates. Instead of monetary payments, T4P offers an alternative where one peer compensates the other in kind by transiting some of its traffic. In comparison to paid peering, T4P can reduce the combined costs of transit and peering for each of the two ASes and thereby alleviate the tensions between the content providers and eyeball networks. 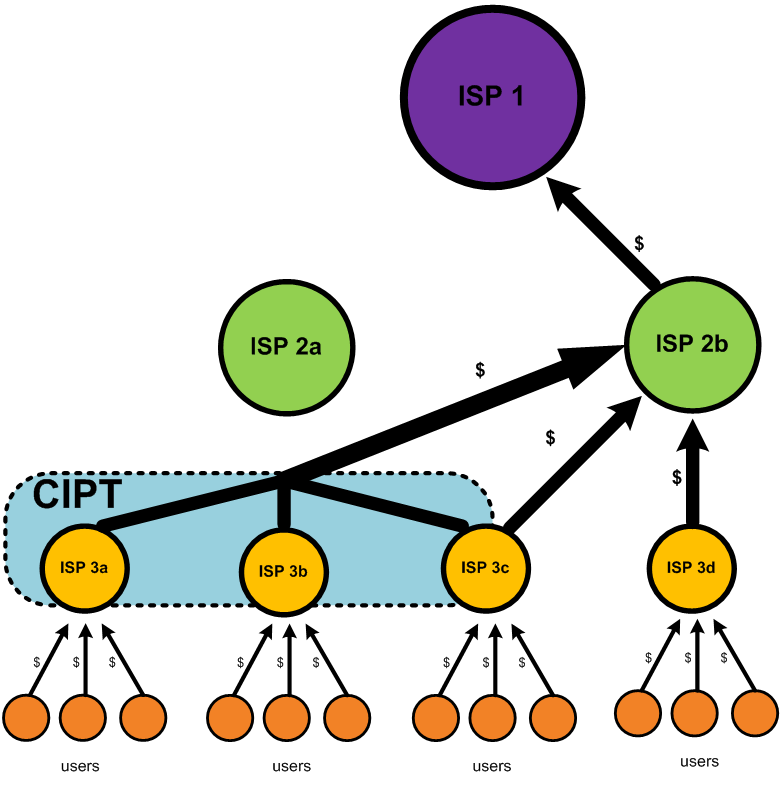 While the above lines of research develop new economic solutions within the existing Internet interconnection framework, some Internet deficiencies are intrinsic to its current architecture, and we pioneered a radically different approach to network interconnections [HotOS 2015]. In particular, we proposed Route Bazaar as an alternative system for flexible Internet connectivity. Instead of decentralized routing over rigid bilateral contracts, Route Bazaar forms end-to-end paths and respective multilateral contracts on demand. To deal with the key challenges of trust and privacy, Route Bazaar learns from crypto-currencies and uses a decentralized public ledger and encryption to effectively support formation, execution, and arbitration of end-to-end contracts.

The NetEcon group also develops economic solutions for CDNs (Content Delivery Networks), which play a major role in the modern Internet ecosystem [INFOCOM 2014]. Specifically, we studied the cache deployment optimization problem of determining how much server, energy, and bandwidth resources a CDN needs to provision in each AS chosen by the CDN for its cache deployment. Our research exposed trade-offs in CDN deployment for realistic AS-level topologies, Internet routing, traffic demands, and non-linear costs for energy and bandwidth. For example, our study showed that the optimal traffic distribution among the cache ASes stays relatively even, with the top 20% of the ASes serving around 30% of the overall user traffic.

We have also had productive collaborations with other researchers at IMDEA Networks Institute including Rade Stanojevic, Balaji Rengarajan, Pierre Francois, Camilo Cardona and Kirill Kogan.