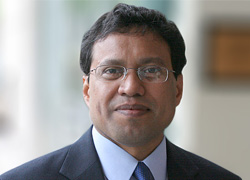 Wireless mesh networks are becoming popular alternatives to wireless LANs and for cost-effective use in varied application environments. There are several technical challenges that must be addressed for mesh networking to be as effective as any other form of broadband networking. Much of these challenges relate to multi-hop wireless communication and limited capacity. The goal of this informal presentation is to facilitate further discussions on these challenges.

This talk will address these issues in two parts. In the first part of the talk, we will overview the ongoing deployment of the Quail Ridge Wireless Mesh Network (QuRiNet); a wide-area mesh testbed encompassing 2000 acres of wild life reserve. In the second part of the talk, we will overview our ongoing research efforts on the topics of multi-channel multi-radio mesh networks, QoS provisioning in wireless mesh, security and reliability of wireless meshes, and other routing and MAC issues.

Some future plans along these lines will conclude the presentation.

Who is Prasant Mohapatra?:

Dr. Prasant Mohapatra is currently the Tim Bucher Family Endowed Chair Professor in the Department of Computer Science at the University of California, Davis. In the past, he was on the faculty at Iowa State University and Michigan State University. He has also held Visiting Scientist positions at Intel Corporation, Panasonic Technologies, Institute of Infocomm Research (I2R), Singapore, and National ICT Australia (NICTA). He was/is on the editorial board of the IEEE Transactions on Mobile Computing, IEEE Transactions on Computers, IEEE Transaction on Parallel and Distributed Systems, ACM WINET, and Ad Hoc Networks. He has been on the program/organizational committees of several international conferences. He was the Program Vice-Chair of INFOCOM 2004, Program Chair of IEEE SECON 2004, QShine 2006, IEEE WoWMoM 2009, and IEEE MASS 2010. He has been a Guest Editor for IEEE Network, IEEE Transactions on Mobile Computing, and the IEEE Computer. Dr. Mohapatra’s research interests are in the areas of wireless networks, specifically on the topics of performance, reliability, security, and QoS. Dr. Mohapatra’s research has been funded though grants from the National Science Foundation, US Army Research Office, Intel Corporation, Siemens, Panasonic Technologies, Hewlett Packard, and EMC Corporation.