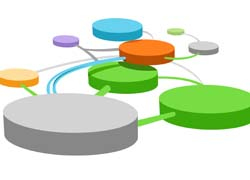 As wireless ad hoc networking becomes more and more popular and ad hoc networks are used for an increasing number of applications, the integration of these networks in today’s Internet, still mostly organized as a set of interconnected fixed and wired networks, becomes a key research field in the computer networking domain. Flooding and routing are some of the main challenges posed by the convergence of the Internet and wireless ad hoc networks. To date, most efforts have been dedicated to design specific protocols for efficient routing in wireless ad hoc networks. The work presented in this talk explores the optimization of mechanisms and extension of protocols already used in the Internet in order to perform flooding and link-state routing in internetworks containing both fixed and wireless ad hoc networks. The presented optimization techniques for link-state routing can be used in different protocols; the talk evaluates the performance of several extensions of OSPF (the Open Shortest Path First protocol) based in these techniques, both by way of simulations over MANETs and by way of experiments over a compound internetwork.

Who is Juan Antonio Cordero Fuertes?