The pain of doing research with real (wireless) devices 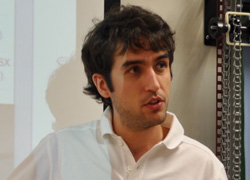 A lot of attention has been given to multihop wireless networks lately. This attention has motivated an increase in the number of 802.11-based deployments, both indoor and outdoor, used to perform measurement studies to analyze WLAN performance by means of wireless sniffers that passively capture transmitted frames. In this talk talk we will introduce some of the major issues that systems researchers have to address when performing such measurements: i) on one hand, the testbed itself requires a significant amount of resources during both its deployment and its maintenance, and they require a “calibration” phase before running the experiments given that as off-the-shelf devices have recently been shown to deviate from the expected behavior–in this talk we summarize a few lessons learned from the deployment of a 28-node wireless testbed; ii) on the other hand, little attention has been given to the fidelity of an individual device, i.e., the ability of a given sniffer to capture all frames that could have been captured by a more faithful device. We assess this fidelity by running controlled experiments, and show that it varies significantly across sniffers, both quantitatively and qualitatively.

Who is Pablo Serrano?

Pablo got his Telecommunication Engineering degree and his PhD from the Universidad Carlos III de Madrid (UC3M) in 2002 and 2006, respectively. He has been with the Telematics Department of UC3M since 2002, where he currently holds the position of Assistant Professor. In 2007 he was a Visiting Researcher at the Computer Network Research Group at Univ. of Massachusetts Amherst partially supported by the Spanish Ministry of Education under a Jos’e Castillejo grant. His current work focuses on performance evaluation of wireless networks. He has over 20 scientific papers in peer-reviewed international journal and conferences. He also serves as TPC member of several international conferences, including IEEE Globecom and IEEE Infocom.