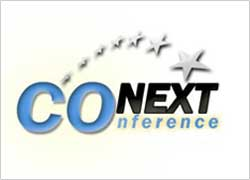 ACM CoNEXT 2008 is a major forum for future networking technologies. Previous CoNEXT Conferences have successfully encouraged original, long-term studies and contributed to the integration of networking research on an international level. The 4th ACM International Conference on emerging Networking EXperiments and Technologies (ACM CoNEXT 2008), will be hosted by the University Carlos III of Madrid. The conference will be a major forum for presentations and discussions of novel networking technologies, which are set to shape the future of Internetworking. We strive to open informative and stimulating debates between distinct international research communities. The conference is single-track and will feature a high-quality technical program, with significant opportunities for individual and small-group technical and social interactions. The main conference will also be preceded by three one-day workshops.

This year’s conference is organized by University Carlos III of Madrid and IMDEA Networks, and sponsored by ACM SIGCOMM.