SoftAir is a new wireless software-defined architecture with network function virtualization (NFV) solutions for 5G wireless systems. The concept of SDN has been proposed to efficiently create centralized network abstraction with the provisioning of programmability over the entire network. Moreover, the complementary concept of NFV has been further proposed to effectively separate the abstraction of functionalities from the hardware, such as decoupling the data forwarding plane from the control plane. These two concepts bring the SoftAir architecture that provides cellular networks with the needed flexibility to evolve and adapt according to the ever-changing network context. Three network management tools are built upon SoftAir. First, an in-band control traffic balancing for a centralized controller is proposed to find the optimal control traffic forwarding paths for each switch/BS in such a way the average control traffic delay in the entire network is minimized. Second, a traffic-driven optimal network planning is developed for multi-controller placement that jointly optimizes controller placement and control traffic forwarding paths so that the required controllers and the control traffic delay are minimized simultaneously. Third, two delay-based hypervisors (schdulers) are proposed to achieve high system performance with hybrid light-tailed and heavy-tailed traffic flows. Also dynamic BS formation are presented  to solve NLOS problem in 5G millimeter-wave systems. Moreover, a software-defined massive MIMO scheme is developed via 5G spectral-efficient controller. 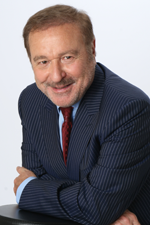 I. F. AKYILDIZ is the Ken Byers Chair Professor with the School of Electrical and Computer Engineering, Georgia Institute of Technology, Director of the Broadband Wireless Networking Laboratory and Chair of the Telecommunications Group. He is the Editor-in-Chief of Computer Networks (Elsevier) Journal since 2000, the founding Editor-in-Chiefs of the Ad Hoc Networks Journal (2003),  Physical Communication (PHYCOM) Journal (2008), and Nano Communication Networks (NANOCOMNET) Journal (2010) all published by Elsevier. Dr. Akyildiz is an IEEE FELLOW (1996) and an ACM FELLOW (1997). He received numerous awards from IEEE and ACM. Due to Google scholar, his papers received over 92+K citations and his h-index is 105 as of July 2017. His current research interests are in 5G Wireless Systems, Nano-Scale Communications, Molecular Communciation, Software Defined Networking and Wireless Sensor Networks in Challenged Environment.