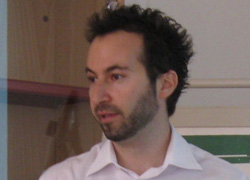 Delay Tolerant Networks (DTN) are networks of self-organizing wireless nodes, where end-to-end connectivity is intermittent. In these networks, content or information between nodes is exchanged (opportunistically), whenever two nodes are within range (“in contact”). Forwarding decisions are generally probabilistic and based on locally collected knowledge about node behavior (e.g., past contacts between nodes) to predict future contact opportunities. The use of complex network analysis has been recently suggested to perform this prediction task and improve the performance of opportunistic (DTN) routing. Contacts seen in the past are aggregated to a “Social Graph”, and a variety of metrics (e.g., entrality and similarity) or algorithms (e.g., community detection) can be used to assess the utility of a node to deliver a content or bring it closer to the destination.

The first part of the talk focuses on how contacts arising from mobility should be optimally aggregated to an appropriate contact graph. We study two well-known DTN routing algorithms that rely on such complex network analysis, and show that good performance is only achieved for a narrow range of aggregation levels, where the produced graph most closely reflects the underlying mobility structure. To this end, we propose an online algorithm that uses concepts from unsupervised learning and spectral graph theory to infer this “correct” graph structure; this algorithm allows each node to locally identify and adjust to the optimal operating point, and achieves good performance in all scenarios considered. The second part of the talk focuses on the actual social properties of human mobility measurements.

Thrasyvoulos Spyropoulos was born in Athens, Greece, in July 1976. He received the Diploma in electrical and computer engineering from the National Technical University of Athens, Greece, and the Ph.D. degree in electrical engineering from the University of Southern California, Los Angeles, in 2006. During 2006-2007, he was a Postdoctoral Researcher at INRIA, Sophia Antipolis, France. He is currently a Senior Researcher and Lecturer with the Swiss Federal Institute of Technology (ETH), Zurich. His research interests include stochastic modeling and optimization of networks, delay tolerant networks, mobility modeling, social networks and network science, and others. He is the co-recipient of the best paper award in IEEE SECON 2008, and has served in the TPC of various major conferences such as INFOCOM, SECON, LANMAN, etc.