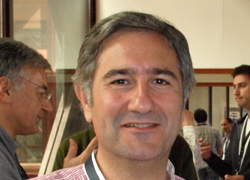 Energy conservation is drawing increasing attention in data networking. One school of thought believes that a dominant amount of energy saving comes from turning off network elements. The difficulty is that transitioning between the active and sleeping modes consumes considerable energy and time. This results in an obvious trade-off between saving energy and provisioning performance guarantees such as end-to-end delays.

We study the following routing and scheduling problem in a network in which each network element either operates in the full-rate active mode or the zero-rate sleeping mode. For a given network and traffic matrix, routing determines the path along which each traffic stream traverses. For frame-based periodic scheduling, a schedule determines the active period per element within each frame and prioritizes packets within each active period. For a line topology, we present a schedule with close-to-minimum delay for a minimum active period per element. For an arbitrary topology, we partition the network into a collection of lines and utilize the near-optimal schedule along each line. Additional delay is incurred only when a path switches from one line to another. By minimizing the number of switchings via routing, we show a logarithmic approximation for both energy consumption and end-to-end delays.

If routing is given as input, we present two schedules one of which has active period proportional to the traffic load per network element, and the other proportional to the maximum load over all elements. The end-to-end delay of the latter is much improved compared to the delay for the former. This demonstrates the trade-off between energy and delay.

Who is Dr. Antonio Fernández Anta?

Antonio Fernández Anta is a Senior Researcher at Institute IMDEA Networks since the fall of 2010. Previously he was a Full Professor at the Universidad Rey Juan Carlos in Madrid, where he has been on the Faculty since 1998. He was before on the Faculty of the Universidad Politécnica de Madrid. He has been a postdoc at the Massachusetts Institute of Technology from 1995 to 1997.

Antonio has more that 15 years of research experience, with a steady productivity of more than 5 papers per year on average. He has published in top conferences and journals like INFOCOM, STOC, FOCS, PODC, DISC, Journal of the ACM, SIAM Journal on Computing, or IEEE Transactions on Computers. He is member of the Steering Committee of DISC and has served in the TPC of numerous conferences and workshops. At the URJC he founded the LADyR research group (www.ladyr.es) and the ACM Student Chapter (as Faculty Sponsor). He also founded the regional computing programming contest CUPCAM (www.cupcam.es). He is a senior member of the IEEE since 2002 and of the ACM since 2007.

Antonio received his M.Sc. and Ph.D. degrees in Computer Science from the University of Louisiana in 1992 and 1994, respectively. His PhD thesis studied the Cartesian product of graphs as a mean to construct efficient interconnection networks for multiprocessors. He completed his undergraduates studies (Licenciado and Diplomado en Informática) at the Universidad Politécnica de Madrid, Spain, in 1988 and 1991 respectively, having received awards at the university and national level for his academic performance.