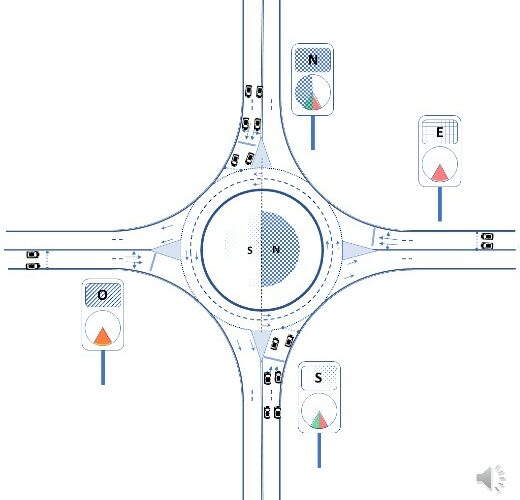 We look at roundabouts as synchronous car multiplexers to overcome the current limitations of roundabouts in capacity, safety, and energy consumption and use an out-of-the-box approach to solve the difficult and multidisciplinary challenge of roundabout improvement. Roundabouts appeared in the sixties in the UK and evolved in their design without significant conceptual changes. One of the main innovations is the turbo roundabout, extensively adopted in the Netherlands and increasingly in other countries. Experience and multiple mathematical models show why the capacity of roundabouts is quite limited, whereas safety – although better than with intersections – is not optimal. Even though autonomous cars bring the promise of fully automated, efficient, and safe traffic in future, such systems should be compatible with both manually driven and autonomous vehicles during the long transition period. Incorporating existing advanced technologies to the signaling and control of roundabouts will undoubtedly contribute to these improvements but should not restrict this compatibility. We approach roundabouts as synchronous switches of vehicles and propose a roundabout system (synchronous roundabouts with rotating priorities) based on vehicle platoons arriving at the roundabout at a uniform speed and within the time slot assigned to their entry, avoiding conflicts and stops. The proposed signaling system is visual for human drivers and wireless for connected and autonomous vehicles. A variety of wireless based technologies is applicable to this concept and new signals and signaling methods will surely improve our initial concept. 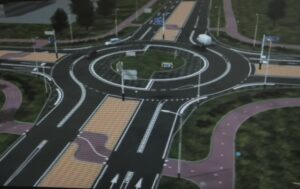 The talk contains two main parts. First, we evaluate – analytically and via simulations – standard dual-lane roundabouts of different radii for several values of the average distance between vehicles. The results show that average delays are 28.7% lower, with negligible dispersion. The capacity improvements depend on design parameters, are moderate for small roundabouts, and grow to 70-100% for short inter-vehicular distances and medium to large roundabouts. Simulations with unbalanced traffic maintain the capacity improvement over standard roundabouts. Second, we present an important update over our recent SYROPS  paper to handle incidents where a vehicle does not follow the circulation rules at roundabouts (e.g., lane turn restriction, lane change prohibition, staying inside the roundabout) and describe the application of SYROPS to turbo roundabouts which strongly enforce the circulation rules: no lane change is allowed inside the roundabout, and the preselection of a lane at the access depends on the roundabout exit.

About Guillermo Ibáñez and Tobias Meuser

Guillermo Ibáñez received his M.S. degree in Telecommunication Engineering at the Technical University of Madrid in 1975 and Ph.D. degree in Communication Technologies at Carlos III University of Madrid in 2005. He has a long R&D experience in the telco industry at IT&T Labs Madrid and then at Alcatel Spain in the international development of System 12 Switching System and Litespan 1540 Multiservice Access till 2002. From 2006 to 2020, he worked as an Associate Professor in the Area of Telematics Engineering at the Universidad de Alcala, where he is now an Honorific Researcher. His research interests are in scalable Ethernet networks, wired and wireless. His latest research interest is focused on a multidisciplinary approach to substantially increase the capacity, safety, and sustainability of roundabouts. He is the first inventor on seven patents.

Tobias Meuser studied business informatics at the University of Hagen and informatics at the Technical University of Darmstadt. From 2016, he worked as a research assistant in the Distributed Sensing Systems Group of the Multimedia Communications Lab (KOM) at TU Darmstadt. Since 2020, he is the head of the Adaptive Communication Systems Group at KOM. His research interests center on approximation techniques for communication networks, especially for network monitoring.