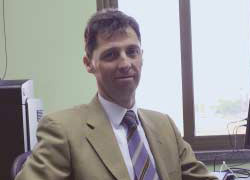 Research is the process of exploration of new ideas and allows Telefonica to look into the future, working on tomorrow’s problems and finding solutions that people can only dream about today.

As a result Telefonica is investing in bringing together incredibly passionate talented people with different view points (nationalities, disciplines, backgrounds) to follow their dreams, create new subjects and as a result new worlds for Telefonica’s customers.

Arturo Azcorra graduated from Loy Knorrix High School (Michigan, USA) in 1980. He received his M.Sc. degree in Telecommunications from Technical University of Madrid (Spain) with honors, and the Price Waterhouse price to the best student, in 1986. He then obtained his Ph.D. from the same university in 1989. His Ph.D. received the national award to the best thesis, jointly granted by the Professional Association of Telecommunication Engineers and the National Association of Electronic Industries. In 1993 he obtained an MBA from Instituto de Empresa (one of the best Bussiness Schools in the World), graduating as the first student in his class.

He has been associated professor at Politechnical University of Madrid from 1987 to 1998. In 1999 he became full professor at University Carlos III of Madrid, where he has stayed up to now. In 2000 he was appointed deputy Vice-Provost for Academic Infrastructures at U. Carlos III of Madrid, post under which he continued until 2007, developing the application of Information Technologies to research and teaching. He has been a visiting professor at ICSI U.C. Berkeley in 1999, and at Massachusetts Institute of Technology in 2002. In 2006 he was appointed Director of the International Research Institute IMDEA Networks.

Professor Azcorra is an IEEE Senior member, and ACM-SIGCOMM member, and has participated and directed over 35 European research and technological development projects from ESPRIT, RACE, ACTS and IST programmes. He has been de Coordinator of the international Networks of Excellence E-NEXT and CONTENT, from the European Commission VI Framework Programme. He has also performed direct consulting and engineering work for institutions such as European Space Agency, MFS-Worldcom, Madrid Regional Government, RENFE,REPSOL and the Spanish Ministry of Science and Technology.

He has been program committee member of international conferences in several editions of IEEE-PROMS, IDMS, QofIS, CONEXT and IEEE-INFOCOM. He has been the general co-chair for CONEXT ’05, steering committee member for CoNEXT’06 and CoNEXT’07, and TPC co-chair for INFOCOM’06. His list of papers published in national and international magazines, books and conferences is over 100 titles. Current research projects include broadband networks, multicast teleservices, active networks, and advanced IP networks.