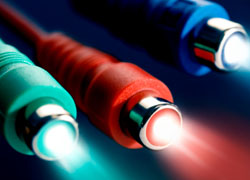 Multimedia and information technology are reaching limits in terms of what can be done in multimedia applications with only sight and sound. The next critical step is to bring the sense of “touch” over network connections, which is commonly known as Tele-haptics. Haptics, a term which was derived from the Greek verb “haptesthai” meaning “to touch”, introduces the sense of touch and force into the human-computer interaction. Currently, research on haptics is broadly categorized into human haptics, machine haptics, and computer haptics. Human haptics is mostly conducted by psychologists to study the mechanism of the “touch” modality, while machine haptics refers to the design of haptic devices to reproduce the sense of “touch”. Computer haptics covers all the aspects in haptics applications. The potential of haptics as a new media is quite significant for many applications such as tele-presence, tele-learning, tele-medicine, tele-operation in hazardous environments, industrial design and testing, medicine, gaming, and any related interactive virtual reality application. In this Talk we will give an overview of collaborative haptic virtual environments (C-HAVE), discuss some research issues and address some challenges.

Who is Abdulmotaleb El Saddik?

Abdulmotaleb El Saddik is University Research Chair and Professor, SITE, University of Ottawa and recipient of the Professional of the Year Award (2008), the Friedrich Wilhelm-Bessel Research Award from Germany’s Alexander von Humboldt Foundation (2007) the Premier¹s Research Excellence Award (PREA 2004), and the National Capital Institute of Telecommunications (NCIT) New Professorship Incentive Award (2004). He is the director of the Multimedia Communications Research Laboratory (MCRLab). He was Director of the Information Technology Cluster, Ontario Research Network on Electronic Commerce (2005-2008). He is Associate Editor of the ACM Transactions on Multimedia Computing, Communications and Applications (ACM TOMCCAP), IEEE Transactions on Multimedia (TMM) and IEEE Transactions on Computational Intelligence and AI in Games (IEEE TCIAIG) and Guest Editor for several IEEE Transactions and Journals. Dr. El Saddik has been serving on several technical program committees of numerous IEEE and ACM events. He has been the General Chair and/or Technical Program Chair of more than 25 international conferences symposia and workshops on collaborative hapto-audio-visual environments, multimedia communications and instrumentation and measurement. He is leading researcher in haptics, service-oriented architectures, collaborative environments and ambient interactive media and communications. He has authored and co-authored two books and more than 280 publications. He has received research grants and contracts totaling more than $12 million and has supervised more than 90 researchers. His research has been selected for the BEST Paper Award three times. Dr. El Saddik is a Distinguished Member of ACM, an IEEE Distinguished Lecturer, Fellow of the Canadian Academy of Engineering, Fellow of the Engineering Institute of Canada and Fellow of IEEE.