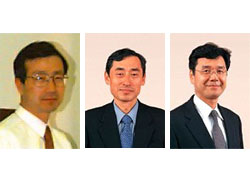 Dr. Kenichi Mase, Dr. Toshini Tsuboi and Dr. Hiromi Ueda will visit Institute IMDEA Networkson Monday September 20th and will take the opportunity to present their research lines. The overall talk will last about 45 minutes, including questions and answers, and it will be divided in the following three 15 minute slots:

Who are the speakers?

Kenichi Mase received the B. E., M. E., and Dr. Eng. Degrees in Electrical Engineering from Waseda University, Tokyo, Japan, in 1970, 1972, and 1983, respectively. He joined Musashino Electrical Communication Laboratories of NTT Public Corporation in 1972. He was Executive Manager, Communications Quality Laboratory, NTT Telecommunications Networks Laboratories from 1994 to 1996 and Communications Assessment Laboratory, NTT Multimedia Networks Laboratories from 1996 to 1998. He moved to Niigata University in 1999 and is now Professor, Graduate School of Science and Technology, Niigata University, Niigata, Japan. He received IEICE best paper award for the year of 1993 and the Telecommunications Advanced Foundation award in 1998. His research interests include communications network design and traffic control, quality of service, mobile ad hoc networks and wireless mesh networks. He was President of IEICE-CS in 2008. Prof. Mase is an IEEE and IEICE Fellow.

Toshinori Tsuboi received his B.E., M.E., and Ph.D. degrees in electrical communication engineering from Waseda University, Tokyo, Japan, in 1973, 1975, and 1986, respectively. In 1975, he joined NTT Electrical Communication Laboratories, where he was involved in the research and development of a PCM channel bank system and a high-speed network architecture, and the proposal of a synchronous digital hierarchy (SDH) interface and ATM virtual path concept. After engaging in standardization activities, he became involved in the research and development of SDH transmission systems, ATM access and transport systems. In 2000, he moved to Tokyo University of Technology, and is currently a professor in the School of Computer Science. His research interests are wireless and optical IP networking and RFID applications. He received the IEICE Young Engineering Award in 1983, NTT President Award in 1982 and 1995, and ICT Accomplishment Award from the ITU Association of Japan in2010. He is a Fellow of IEICE

Hiromi Ueda received his B.S., M.S. and Ph.D. degrees from Tokyo Institute of Technology, Tokyo, Japan, in 1975, 1977 and 1993, respectively. He joined NTT in 1977 and worked in NTT Laboratories on the R&D of digital signal processing, digital cross-connect systems, SDH transmission systems, ATM transport systems and B-PON systems up to 2003. He has been a professor in the School of Computer Science, Tokyo University of Technology, Tokyo, Japan since 2003. His current research interests include optical access networks, network survivability, and network QoS control. Dr. Ueda is a Chair, Technical Committee on Communications Quality & Reliability (CQR-TC), IEEE ComSoc, and served as a Co-Chair of the CQR-TC supporting symposium, IEEE ICC 2005 to 2009 consecutively, and GLOBECOM 2006. He is a Chair, IEICE-CS Technical Committee on Communication Systems. He received the NTT President Award in 1990, 1995, and 1999, received the IEEE CQR-TC Chairman’s Award from in 2006, and the Best Paper Award at the IEEE CQR 2008 workshop. He is a Fellow of IEEE and IEICE.