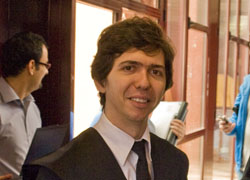 The media access control (MAC) layer of the IEEE 802.11 standard specifies a set of parameters that regulate the behavior of the wireless stations when accessing the channel. Although the standard defines a set of recommended values for these parameters, they are statically set and do not take into account the current conditions in the wireless local area network (WLAN) in terms of, e.g., number of contending stations and the traffic they generate, which results in suboptimal performance. In this thesis we propose two novel control theoretic approaches to optimally configure the WLAN parameters based on the dynamically observed network conditions: a Centralized Adaptive Control (CAC) algorithm, whereby the access point (AP) computes the configuration that maximizes performance and signals it to the active stations, and a Distributed Adaptive Control (DAC) algorithm, which is independently employed by each station with the same goal.

In contrast to previous proposals, which are mostly based on heuristics, our approaches build upon (i) analytical models of the WLAN performance, used to derive the optimal point of operation of the 802.11 protocol, and (ii) mathematical foundations from single- and multi-variable control theory, used to design the mechanisms which drive the WLAN to this point of operation. Another key advantage of the proposed algorithms over existing approaches is that they are compliant with the 802.11 standard and they can be implemented by current wireless cards without introducing any modifications into their hardware and/or firmware. We show by means of an exhaustive performance evaluation study that our algorithms maximize the WLAN performance in terms of throughput and delay under a wide set of network conditions, substantially outperforming the standard recommended configuration as well as previous adaptive proposals.

Finally, we present our experiences with implementing the proposed adaptive algorithms in a real IEEE 802.11 testbed and discuss the implementation details of the building blocks that comprise these mechanisms. We evaluate their performance by conducting extensive measurements, considering different network conditions in terms of number of nodes, transmission power employed and traffic generated. Based on the obtained results, we provide valuable insights on the performance of the distributed and centralized algorithms and discuss the suitability of these schemes for real deployments.

Who is Paul Patras?

Paul Patras received his Dipl.Eng. degree in Telecommunications in 2006 from the Faculty of Electronics, Telecommunications and Information Technology of the Technical University of Cluj-Napoca, Romania. He finalised his Dipl. Eng. thesis during his 3-month stay with the Advanced Broadband Communications Research Group at the Technical University of Catalonia, Barcelona. In 2008 he received his M.Sc. degree in Telematics Engineering from the University Carlos III of Madrid. Between January and July 2010 he was visiting the Rice Networks Group at Rice University, Houston, USA, where he worked under the supervision of Prof. Edward Knightly, investigating client-access mechanisms and mobility support in wide-spectrum networks. From October 2007, he is a research assistant at Institute IMDEA Networks and a Ph.D. candidate at University Carlos III of Madrid.