Networked 3-D Virtual Collaboration in Science and Education: Towards ‘Web 3.0’ (A Modeling Perspective) 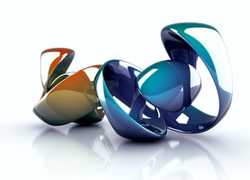 Combined advances in high speed networking, mobile devices, application sharing, web services, virtual world technologies and large scale event processing are converging to create a new world of pervasive, ubiquitous “presence” of users, which offers tremendous potential for social interaction and co-creation. The communication networking and computing requirements of this converged human-centric environment are also increasing at an accelerated pace. In this new environment, it is imperative that the much-needed networking and computing resources align closely with the needs and patterns dictated by the applications, social networks, and by the human users. We believe that the success of such socio-technical systems will hinge on the way networks capture and interact with human presence and location, in all of its physical, virtual and perceived aspects.

A robust, scalable, and dynamic communication infrastructure is necessary to connect service consumers and providers within such rich, interactive collaborative virtual environments. Service-oriented networking (SON) is an emerging paradigm that directly addresses this need by enabling network devices to operate at the application layer to provide functions such as service-based routing, content transformation, and protocol integration to consumers and providers. We anticipate that applications of the future will leverage distributed SON deployment patterns where large numbers of network appliances coordinate with peers using network-wide (or “cloud-wide”) application-specific policies, in order to determine the appropriate points to perform configuration changes based on prevailing network, computing and application conditions.

Modeling and adaptation of resources based on state, location, context-awareness and workload (current or predicted) is highly desirable in these high-performance computing and information socio-technical service systems. In this seminar, we provide an overview of our effort, in collaboration with our College of Management, and with IBM and Cisco, to develop models of emerging next generation network-based services, traffic characterization and predictive and dynamic resource allocation. We present an overview of approaches that we are using for service-aware utility-oriented modeling and resource allocation. We apply such techniques in the context of aggregation network optimization, location-aware hybrid activities in wireless networks, and virtual collaboration environments such as virtual worlds used for science and education.

Michael Devetsikiotis (IEEE S 1985, M 1994, SM 2003) was born in Thessaloniki, Greece. He received the Dipl. Ing. degree in Electrical Engineering from the Aristotle University of Thessaloniki, Thessaloniki, Greece, in 1988, and the M.Sc. and Ph.D. degrees in Electrical Engineering from North Carolina State University, Raleigh, in 1990 and 1993, respectively. As a student he received scholarships from the National Scholarship Foundation of Greece, the National Technical Chamber of Greece, and the Phi Kappa Phi Academic Achievement Award for a Doctoral Candidate at North Carolina State University. He is a senior member of the Institute of Electrical and Electronics Engineers and a member of the honor societies of Eta Kappa Nu, Sigma Xi, and Phi Kappa Phi.

In October 1993 he joined the Broadband Networks Laboratory at Carleton University, Ottawa, Canada, as a Post-Doctoral Fellow. Michael later became an Adjunct Research Professor in the Department of Systems and Computer Engineering at Carleton University in April 1995, an Assistant Professor in July 1996 and an Associate Professor in July 1999. He joined the Department of Electrical and Computer Engineering at NC State as an Associate Professor, in October 2000, and became a Professor in July 2006. He remains an Adjunct Research Professor in the SCE Department, Carleton University. Michael served as Chairman of the IEEE Communications Society Technical Committee on Communication Systems Integration and Modeling and is now a member of the Communications Society Education Board. He has served as an Associate Editor of the IEEE Communications Letters, and is currently an Area Editor of the ACM Transactions on Modeling and Computer Simulation and a member of the editorial boards of the International Journal of Simulation and Process Modeling, the IEEE Communications Surveys and Tutorials, and the Journal of Internet Engineering. He co-chaired the Next Generation Internet symposium under IEEE ICC 2002 in New York, the High-Speed Networks symposium under IEEE ICC 2004 in Paris, the Quality, Reliability and Performance Modeling (QRPM) symposium under IEEE ICC 2006 in Istanbul, and the Quality, Reliability and Performance for Emerging Network Services symposium under IEEE Globecom 2006 in San Francisco. He served recently as Workshops Chair for IEEE Globecom 2008 in New Orleans, and co-chair of the workshop on “Enabling the Future Service Oriented Internet” (2007, 2008 and 2009). Michael will co-chair the QRPM Symposium under IEEE Globecom 2010.