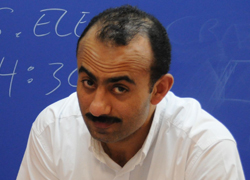 Mohamed Hefeeda is an assistant professor in the School of Computing Science, Simon Fraser University, Canada, where he leads the Network Systems Lab. He holds a Ph.D. from Purdue University, USA, and M.Sc. and B.Sc. from Mansoura University, Egypt. His research interests include multimedia networking over wired and wireless networks, peer-to-peer systems, network security, and wireless sensor networks. Mohamed has served as the program chair of the ACM International Workshop on Network and Operating Systems Support for Digital Audio and Video (NOSSDAV 2010), and as the vice chair of the Distributed Multimedia Track in the International Conference on Embedded and Multimedia Computing (EMC 2010). He has served on many technical program committees of major conferences in his research areas, including ACM Multimedia, ACM Multimedia Systems, ACM/SPIE Multimedia Computing and Networking (MMCN), IEEE Conference on Network Protocols (ICNP), and IEEE Conference on Communications (ICC). He is on the editorial boards of the Journal of Multimedia and the International Journal of Advanced Media and Communication. He served as the guest editor of the special issue on High-Quality Multimedia Streaming in P2P Environments of the International Journal of Advanced Media and Communication .In addition, he serves as the Preservation Editor of the ACM Special Interest Group on Multimedia (SIGMM) Web Magazine.

He has co-authored more than 60 publications in reputable journals and conferences in the past five years. His paper on the hardness of optimally broadcasting multiple video streams with different bit rates won the Best Paper Award in the IEEE Innovations 2008 conference, and his paper on probabilistic coverage in sensor networks was one of the three runners-up (out of 220 submitted papers) for the best paper award in the IEEE ICNP 2007 conference. In addition to publications, he and his students develop actual systems, such as PROMISE, pCache, svcAuth, pCDN, and mobile TV testbed, and contribute the source code to the research community. The mobile TV testbed software won the Best Technical Demo Award in the premier ACM Multimedia 2008 conference. The pCDN (peer-assisted Content Distribution Network) system is currently being field-tested (http://www.bandeapart.fm/pcdn) by the Canadian Broadcasting Corporation (CBC/Radio-Canada), which is the largest online content provider in Canada. His research is supported by multiple grants from Canadian funding agencies (e.g., NSERC and MITACS) and industry (e.g., Nokia and CBC).

The seminar will be conducted in English