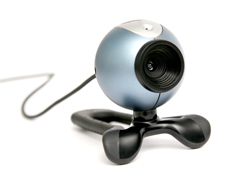 We focus on collaborative video streaming in wired overlay networks using low cost network codes. We propose a scheme that builds on both rateless codes and network coding in order to improve the system throughput and the video quality at clients. Our hybrid coding algorithm permits to efficiently exploit the available source and path diversity, without the need either for expensive routing or for scheduling algorithms.

Specifically, we consider an architecture where multiple streaming servers simultaneously deliver video information to a set of clients. The servers apply Raptor coding on the video packets for error resiliency, and the overlay nodes selectively combine the Raptor coded video packets in order to increase the packet diversity in the system. We analyze the performance of selective network coding and we describe its application to practical video streaming systems. We further compute an effective source and channel rate allocation in our collaborative streaming system. We also investigate the effect of the network coding operations on the degree distribution of the packets at clients. Typically, the denser the distribution is, the higher the complexity is. To cope with this, we propose to modify the degree distribution at the encoder, in such a way that the degree distribution after network coding operations recovers a form that leads to low complexity decoding. We analyze how the degree distribution of the encoded symbols is altered by network coding operations and losses in a regular network. Then, we formulate a geometric optimization problem in order to compute the best degree distribution for encoding at sources, such that the decoding complexity is low and close to Raptor decoders’ performance. Finally, we consider the multi-source delivery case. We propose an effective combination of rateless coding with intra- and inter-session network coding to efficiently exploit the path diversity in the streaming overlay. Network nodes can decide to forward rateless coded packets or to code them in intra- or inter-session mode before transmission. The transmission strategy is determined based on the availability of data sources and the demands of the children nodes. Each network node solves independently a simple flow maximization problem in order to determine the optimal coding policy.

Dr. Nikolaos Thomos received the Diploma and the Ph.D. degrees from the Electrical and Computer Engineering Department of the Aristotle University of Thessaloniki, Thessaloniki, Greece, in 2000 and 2005, respectively.

Currently he is senior researcher with Signal Processing Laboratory (LTS4) of Swiss Federal Institute of Technology (EPFL), Lausanne, Switzerland and Computers and Distributed Systems (CDS) laboratory at University of Bern (UniBe). In 2008, he awarded the highly esteemed Ambizione career award from Swiss National Science Foundation targeted to prospective researchers. His research interests include network coding, multimedia communications, channel coding and distributed systems. He is a member of the IEEE and the Technical Chamber of Greece.