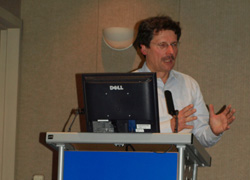 Prof. Dr. Ralf Steinmetz, Full Professor at the Department of Electrical Engineering and Information Technology; Department of Computer Science of the Darmstadt University of Technology (Germany); President of the Board of Trustees at IMDEA Networks

Who is Ralf Steinmetz?

Ralf Steinmetz is one of the world experts in multimedia and P2P applications, is the author of one of the most referenced books in the area, and he has received the ACM Multimedia Award.

Since early 1996 Ralf Steinmetz has been a professor at the dept. of Electrical Engineering and Information Technology as well as at the dept. of Computer Science of the Darmstadt University of Technology, Germany. There he is in charge of a chair position as managing director of the “Multimedia Communications Lab”. From late 1996 until late 2001 he directed the GMD/Fraunhofer Integrated Publications and Information Institute. In 1999 he founded the Hessian Telemedia Technology Competence Center (httc e.V.). On whose board he has since served as chair. He is also one of the directors of the Information Transfer Office at the university. From 2002 to 2004 as dean he managed the department.

Dr. Ralf Steinmetz studied Electrical Engineering with the focus on Telecommunications at the University of Salford, England, and at the Darmstadt University of Technology, Germany, where he received the M.Sc. (Dipl.-Ing.) degree in 1982. Working as a scientific assistant, he received his Ph.D. (Dr.-Ing.) in 1986. His research focused on the area of Petri-Nets and concurrent programming languages. Subsequently he joined the “Advanced Development Department” of Philips Kommunikations Industrie AG in Siegen-Eiserfeld, Germany, where he was involved in ISDN multimedia project workstations development activities.

From 1988 until 1996 he worked at the IBM European Networking Center in Heidelberg, Germany. There he was involved in various multimedia communication activities. He started many IBM activities on multimedia and networking and was in charge of a distributed multimedia laboratory there. He was the leader of the multimedia transport system development and subsequently he was in charge of several application projects and their respective application support issues. He managed the multimedia department in Heidelberg which at that time became IBM’s European Multimedia Center.

At the Darmstadt University of Technology he served as chair for “Industrial Process and System Communications” sponsored mainly by the Volkswagen-Stiftung until early 2001. From late 1996 until late 2001 he was director of the GMD Integrated Publications and Information Institute of the German National Research Center which became an institute of the Fraunhofer Gesellschaft e.V.. There he was in charge of cooperative work, work spaces of the future, interactive learning, media security and mobile networking.

In 1998 he founded the httc e.V. (Hessian Telemedia Technology Competence Center) (1) to provide services in multimedia with the focus telemedia learning (2) further education and (3) to initiate and perform telemedia research activities. He was appointed Chairman of the Board of the HTTC. In 2003, the eFinance-Lab was established with 3 professors of economics of the Johann Wolfgang Goethe-University of Frankfurt and Ralf Steinmetz from the Darmstadt University of Technology.

He initiated and contributed to the success of several start-up activities in his area of interest.

He is the editor and co-author of a multimedia course, which reflects the major issues of the first in-depth technical book on multimedia technology (first published in German in 1993, various revised versions appeared in English and other languages since then). He was and is an editor of various IEEE, ACM and other journals. He was in charge of the first worldwide IEEE Multimedia Task force working group for magazine publication. There he was associate-editor in-chief of the IEEE Multimedia Magazine for many years. He is main editor of the ACM/Springer Multimedia Systems Journal. He has served as chair, vice-chair and member of numerous program and steering committees of communications and multimedia workshops and conferences. Ralf Steinmetz has published over 200 refereed papers. He is a member of the ACM, IEEE, GI and the VDE-ITG. From the IEEE he received several Certificates of Appreciation and from the ACM a “Recognition of Service Award”. In 1999 he received (from IBM) the “Award for Excellence in Internet research” worth approx. $100.000. He was awarded Governor of the ICCC. He was the first German researcher to be awarded the title of Fellow of both, the IEEE in 1999 and the ACM in 2002. In 2005 he became member of the technology advisory board of the “Hessen Agentur” and he was appointed as the advisor for information und communications technology by the Hessian government.