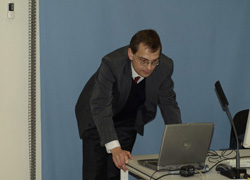 Prof. Dr. Sergey Gorinsky, Assistant Professor at the Applied Research Laboratory in the Department of Computer Science and Engineering at Washington University in St. Louis, USA.

With the Internet offering a single best-effort service, there have been numerous proposals of diversified network services that align better with the divergent needs of different distributed applications. The failure of these innovative architectures to gain wide deployment is primarily due to economic and legacy issues, rather than technical shortcomings. We propose a new paradigm for network service differentiation where design principles account explicitly for the multiplicity of Internet service providers and users as well as their economic interests in environments with partly deployed new services. Our key idea is to base the service differentiation on performance itself, rather than price. The proposed RD (Rate-Delay) services enable a user to choose between a higher transmission rate or low queuing delay at a congested network link. An RD router supports the two services by maintaining two queues per output link and achieves the intended rate-delay differentiation th rough simple link scheduling and dynamic buffer sizing. After analytically deriving specific rules for RD router operation, we conduct extensive simulations that confirm effectiveness of the RD services geared for incremental deployment in the Internet.

Sergey Gorinsky is a native of Skhodnya, USSR and currently works as an Assistant Professor at the Applied Research Laboratory in the Department of Computer Science and Engineering at Washington University in St. Louis, USA. He received the Ph.D. and M.S. degrees from the University of Texas at Austin, USA and Engineer degree from Moscow Institute of Electronic Technology, Zelenograd, Russia. Prof. Gorinsky’s primary research interests are in computer networking and distributed systems. His research contributions include multicast congestion control resilient to receiver misbehavior, analysis of binary adjustment algorithms, and network service differentiation based on performance incentives. Prof. Gorinsky’s work appeared at top conferences and journals such as ACM SIGCOMM, IEEE INFOCOM, and IEEE/ACM Transactions on Networking. He has been serving on the Technical Program Committees (TPCs) of IEEE INFOCOM 2006, 2007, 2008, 2009, ICNP 2008, and other networking conferences. H e co-chaired the TPCs of High-Speed Networks (HSN 2008) at IEEE INFOCOM 2008 and the Symposium on Future Internet Architectures and Protocols (FIAP 2008) at ICCCN 2008. He is serving as a TPC Vice-Chair of ICCCN 2009 and as a Vice-Chair of theIEEE Communications Society (ComSoc) Technical Committee on High-Speed Networking (TCHSN).