«All for one and one for all» Researchers from the IMDEA Institutes and members of the National Police join forces to combat crime. 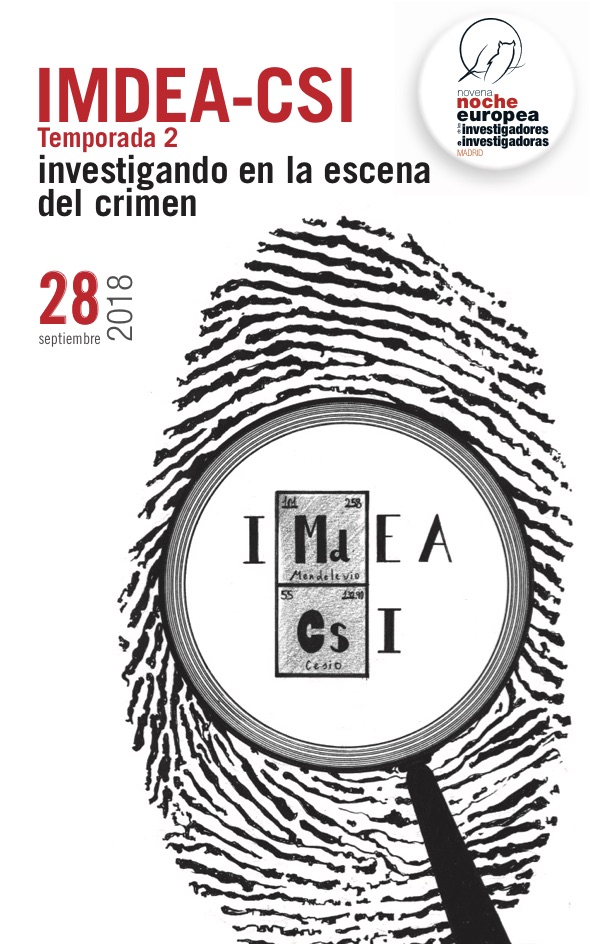 In the first season of IMDEA-CSI: Crime scene investigation, using the example of the famous literary detective Sherlock Holmes, we commented that in those stories as is the case with all other detectives, whether real or fictional, it was clear that advances in scientific and police investigations had been happening in parallel; and that at any point in history, analysing a crime scene would involve using the most advanced scientific expertise available.

In the second event of the series, the main argument is the same: Science, with a capital ‘S’ and the many different disciplines it refers to, contributes decisively to police investigations. What has changed is «the crime». Police investigators and scientists will try to convert doubts into certainties, gathering and analysing evidence to try to identify the murderer. Will they do it?

Or will this be the perfect crime? To find out, come along to the Residencia de Estudiantes de Madrid on the evening of Friday 28 September, between 6.00pm and 8.00pm. Researchers from the IMDEA Water, Food, Energy, Material, Nanoscience, Networks and Software are going to swap their laboratories for a stage set, where they will work with members of the National Police so that the answer to this question is NO!

The researchers and police officers will be «real» as will the evidences, though not so much: these will be prepared to lead the audience directly to the guilty party. You will be able to see how samples are taken, learn about the analysis procedures followed and the results that may be relevant for the investigation and those which don’t mean anything.

The European Researchers' Night in Madrid 2018 coordinated by the Fundación para el Conocimiento madrimasd, is an action framed within the European Horizon 2020 programme, which is held in more than 300 European cities at a time. Around 30 scientific institutions in Madrid are participating in this edition, including the IMDEA Institutes.

Detailed schedule:
18:00 – 19:30 h. The hall at the Residencia de Estudiantes will be converted into a crime scene which will be analysed by researchers from the IMDEA institutes and members of the National Police to identify the murderer.
19:30 – 20:00 h. Questions from the public to the researchers.
Target audience: General public.
Date: Friday, September 28, 2018.
Opening hours: 18:00 – 20:00 h.
Venue: La Residencia de Estudiantes. C/ Pinar, 21-23 – 28006 Madrid.
Organized by: IMDEA Institutes.

This project, part of the European Researchers Night, is funded by the European Commission under the Marie Skłodowska-Curie Actions programme, based on agreement number 818.528.