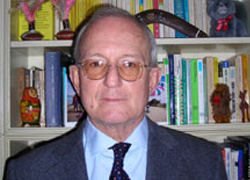 Who is Dr. Marco Ajmone Marsan?

Marco Ajmone Marsan holds a double appointment as Chief Researcher at IMDEA Networks (Spain) and Full Professor at the Department of Electronics (Dipartimento di Elettronica) of the Politecnico di Torino (Polytechnic University of Turin) (Italy). He is the founder of the Telecommunication Networks Group, one of the top research groups in networking in Europe, based at the Politecnico di Torino.

From 2003 to 2009 he was Director of the IEIIT-CNR (Institute for Electronics, Information and Telecommunication Engineering of the National Research Council of Italy). From 2005 to 2009 he was Vice-Rector for Research, Innovation and Technology Transfer at Politecnico di Torino.

He earned his graduate degree in Electrical Engineering (Laurea (110/110)), from the Politecnico di Torino in 1974. This was the highest degree in the field obtainable in Italy at the time. He went on to complete his M.Sc. Electrical Engineering at the University of California at Los Angeles (USA) in 1978 and, in 2002, he was awarded an “Honoris Causa” Ph.D. in Telecommunication Networks from the Budapest University of Technology and Economics.

Marco Ajmone Marsan is involved in several national and international scientific groups: He is Chair of the Italian Group of Telecommunication Professors (GTTI); Italian Delegate in the ICT Committee of the EC’s 7th Framework Program; and Fellow of the IEEE.

He was also principle investigator for a large number of research contracts with industries, and coordinator of several national and international research projects. His outstanding contributions to his field were recognized in 2006, when the President of Italy, Carlo Azeglio Ciampi, awarded him the “Commendatore” of the “Ordine al Merito della Repubblica Italiana” (Commander of the Republic of Italy’s Order of Merit). In 2003, he was also listed by Thomson-ISI amongst the most highly-cited researchers in Computer Science.