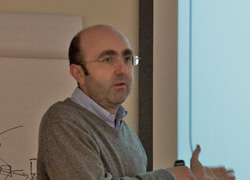 Energy consumption in Computer Networks is an issue that is gaining increasing attention. In this talk we will review the issue of energy consumption in Computer Networks to then focus on Ethernet where a new standard is being developed to improve energy efficiency. We will discuss some of the alternatives that were considered during the Energy Efficient Ethernet standardization process and describe the solution adopted in the standard. Then we will present some results of an initial performance evaluation of the standard that shows the potential savings for different scenarios. We will conclude the talk by outlining the implications that Energy Efficient Ethernet will have on different aspects of the LANs.

Who is Pedro Reviriego?

Pedro Reviriego received the M.Sc. and Ph.D. degrees in telecommunications engineering from Technical University of Madrid, Madrid, Spain, in 1994 and 1997, respectively. From 1997 to 2000 he was an R&D engineer at Teldat, Madrid, working on router implementation. In 2000, he joined Massana to work on the development of 1000BaseT transceivers. During 2003, he was a Visiting Professor at University Carlos III, Leganés, Madrid. From 2004 to 2007, he was Distinguished Member of Technical Staff with LSI Corporation working on the development of Ethernet transceivers. He is currently with Universidad Antonio de Nebrija, Madrid. His research interests are fault tolerant signal processing circuits, memory reliability and computer networks. Some of his recent works can be found in the following link http://www.nebrija.es/~jmaestro/esa/researchPapers.htm